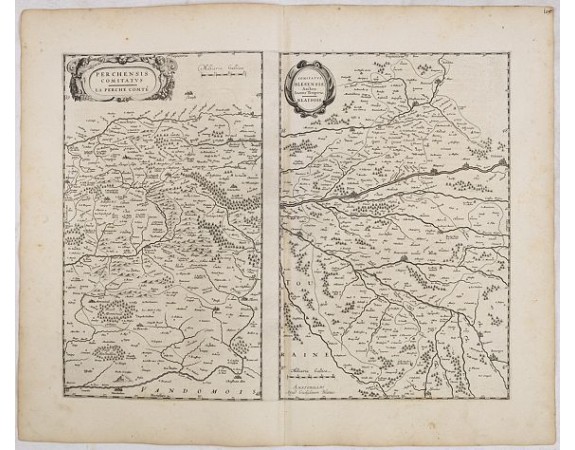 Two maps on one sheet. The map of Blaisois is prepared by Joannes Temporius. Map depicts the region Basse Normandie with the cities of Mortaigne, Longny and Senonches prominent, together with the region of Blaisois with the cities of Orléans, Blois and Bourges. Both maps have cartouches and a scale of miles.
From early on Willem Jansz. Blaeu aimed of publishing an atlas to compete with the Hondius-Jansson Atlas. By 1630, he had published at least 17 folio size maps.
Blaeu was able to realize his plan soon after he had acquired the copper plates of the atlas maps by Jodocus Hondius. The "Appendix followed in 1630.
In 1635 he finally realized a "international edition" of a world atlas, the "Theatrum Orbis Terrarum".