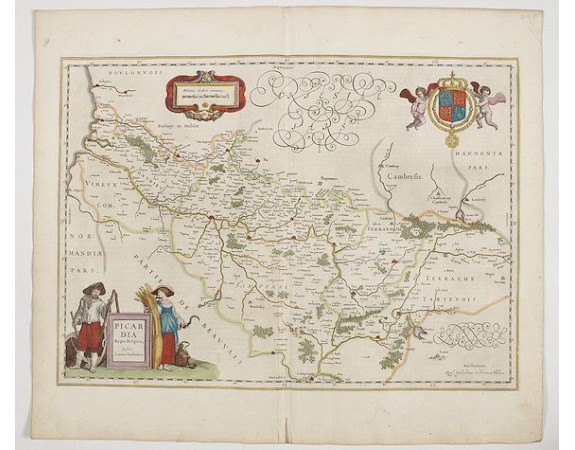 Map of the northern region of Picardy. The region is well known due to the 4 major battles fought between France, Britain and Germany between 1915-18 during World War I. This lovely map has three delightful and most decorative cartouches, that balance the map superbly. From early on Willem Jansz. Blaeu aimed of publishing an atlas to compete with the Hondius-Jansson Atlas. By 1630, he had published at least 17 folio size maps.
Blaeu was able to realize his plan soon after he had acquired the copper plates of the atlas maps by Jodocus Hondius. The "Appendix followed in 1630.
In 1635 he finally realized a "international edition" of a world atlas, the "Theatrum Orbis Terrarum". Jean Surhon, cartographer, goldsmith and engraver, originally drew this map in 1557.
Based on 0 reviews. - Write a review
200€
90 views
Add to Cart
Ask Question
Add to Wish List Compare this Product