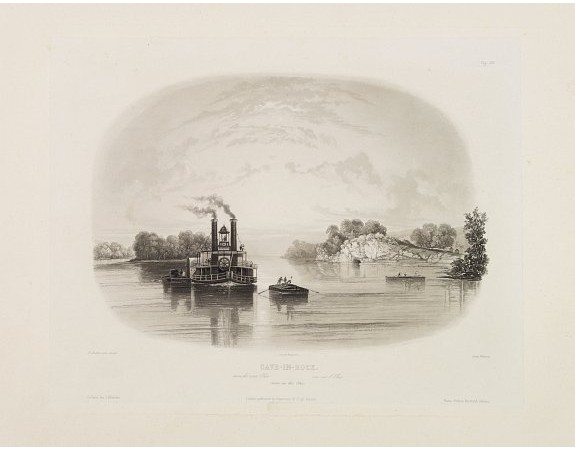 Original aquatint engraving for "Travels in the Interior of North America between 1832-34". Engraved by Lucas Weber. The finest work on American Indian life and the American Frontier. The book is the result of an epic journey which took place at a time when the mass migrations of settlers and pioneers was about to alter irrevocably the unspoiled West. Karl Bodmer was engaged by Prince Maximilian to provide a record of his travels among the Plains Indians of North America during 1833-34. The most important part of their travels started from St Louis, whence they proceeded up the treacherous Missouri along the line of forts established by the American Fur Company. At Bellevue they encountered their first Indians, then went on to make contact with the Sioux Tribe, learning and recording their little known ceremonial dances, their powerful pride and dignity. Transferring from the 'Yellow Stone' to another steamer the 'Assiniboine', they continued to Fort Clark, studying there the Mandan, Mintari and Crow Tribes, then the Cree and Assiniboine tribes at Fort Union, the main base of the American Fur Company.

On a necessarily much smaller vessel they journeyed through the extraordinary geological scenery of that section of the Missouri to Fort Mackenzie in Montana, established over a month there a cautious friendship developed with the fearsome Blackfoot Tribe. From this, the westernmost point reached, it was considered too dangerous to continue and the return journey downstream began. The winter brought its own difficulties and discomforts, but Bodmer was still able to execute numerous studies of villages, dances and, especially, the people, who were often intrigued and delighted by his work. The portraits are particularly notable for their capturing of individual personalities, as well as forming, together with Prince Maximilian's written studies, the primary accounts of what became virtually lost cultures.
Based on 0 reviews. - Write a review
450€
166 views
Add to Cart
Ask Question
Add to Wish List Compare this Product