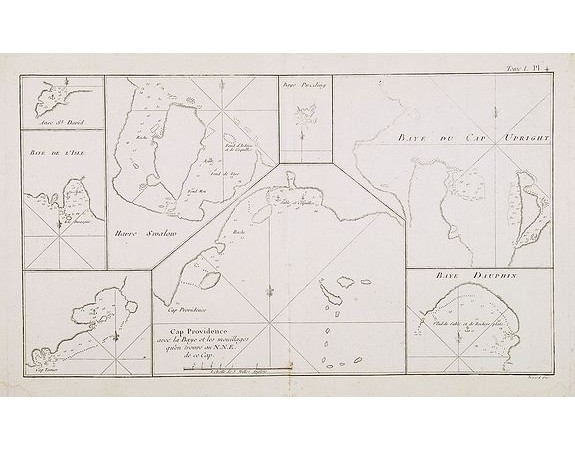 This print is taken from the first French edition of James Cook's first voyage entitled Relation des voyages entrepris par ordre de sa Majesté Britannique actuellement régnante pour faire des découvertes dans l'hémisphère méridional, et successivement exécutés par le commodore Byron, le capitaine Carteret, le capitaine Wallis et le capitaine Cook dans les vaisseaux "le Dauphin ", "le Swallow" and "l'Endeavour".
Translated by Suard and published in Paris by Saillant et Nyon - Pancoucke in 4 volumes with numerous illustrations, charts, and maps.
An Account of the voyages undertaken by the order of His Present Majesty for making discoveries in the southern hemisphere, and successively performed by Commodore Byron, Captain Wallis, Captain Carteret and Captain Cook, in the Dolphin, the Swallow, and the Endeavour , the first official three-volume account of James Cook's first voyage, was edited by John Hawkesworth in English in London in 1773. The first volume contains accounts of the voyages of Byron, Wallis, and Carteret. The second and third volumes are entirely concerned with Cook's voyage, based upon material drawn from journals kept by Cook and the papers of Joseph Banks. Hawkesworth composed his account in the first person of Cook and incorporated Banks's descriptions and observations as well as his own commentary, without ever distinguishing the different sources. In addition to the written account of the voyage, the two volumes related to Cook's voyage include 31 illustrations, charts and maps.

Captain James Cook, explorer, cartographer and hydrographer went to command several notable voyages, the first was from 1768-1771. He was led to his commission by the direction of British overseas exploration in 1766 as commander of HM Bark Endeavour for the first of three Pacific voyages. Cook later mapped the complete New Zealand coastline, making only some minor errors. He then sailed west, reaching the south-eastern coast of the Australian continent on 19 April 1770, and in doing so his expedition became the first recorded Europeans to have encountered its eastern coastline.
Cook's journals were published upon his return, and he became something of a hero among the scientific community. Cook's 12 years sailing around the Pacific Ocean contributed much to European knowledge of the area.
Based on 0 reviews. - Write a review
60€
176 views
Add to Cart
Ask Question
Add to Wish List Compare this Product