GALLE, Th. - Composite atlas of the Low Countries with 18 double page maps by or after Hessel Gerriotsz. Theodor Galle, etc. 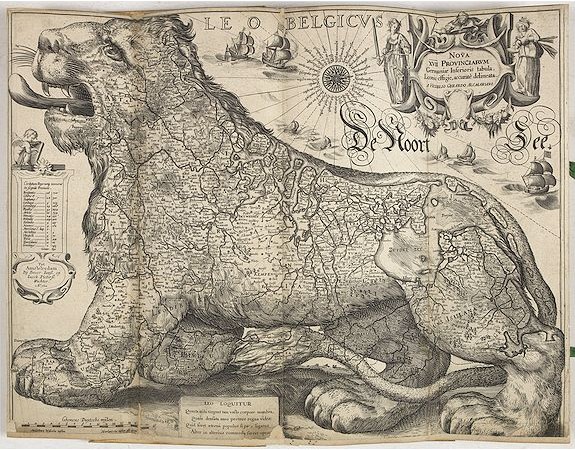 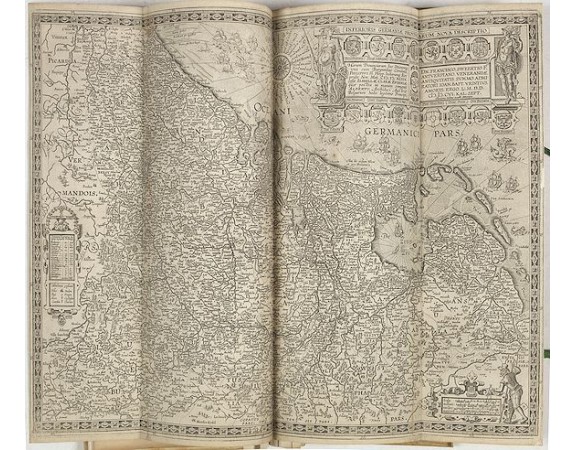 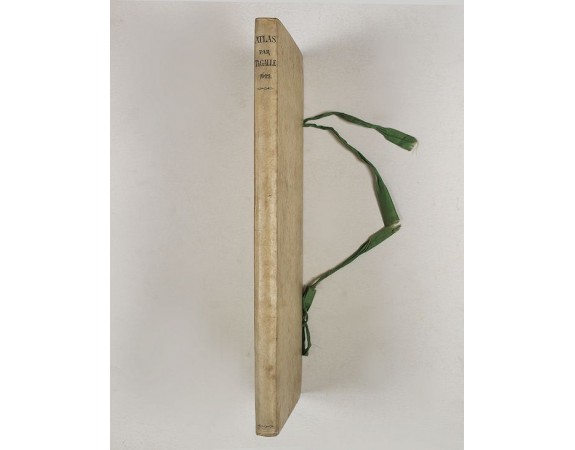 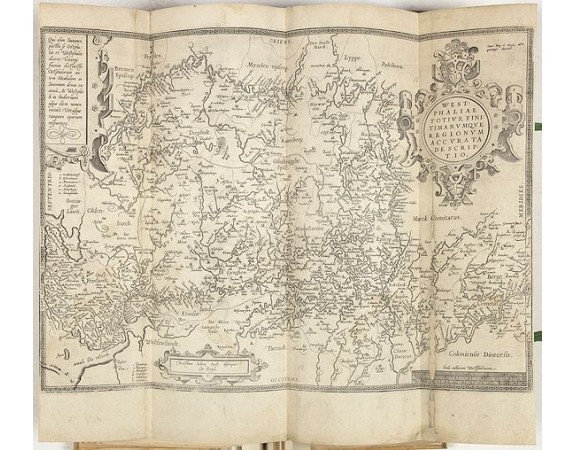 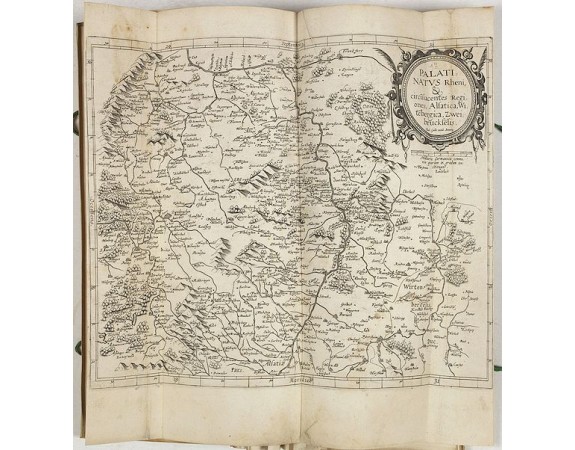 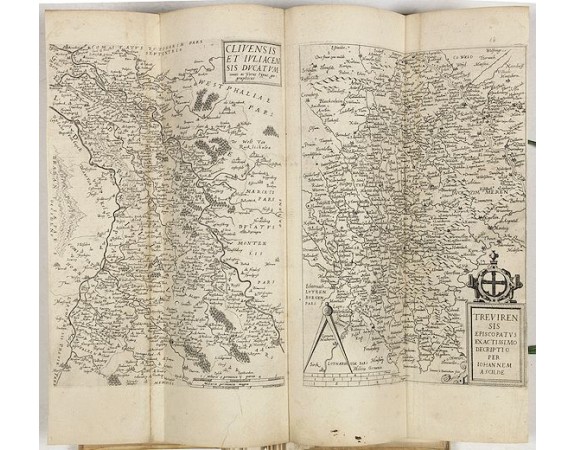 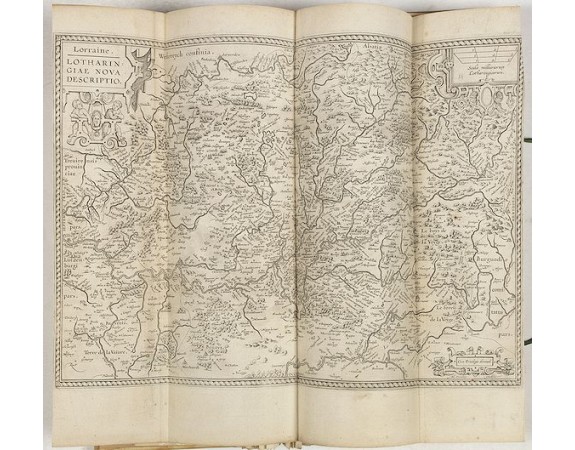 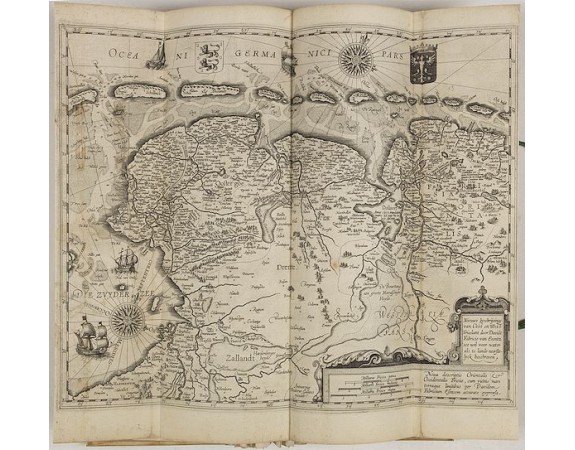 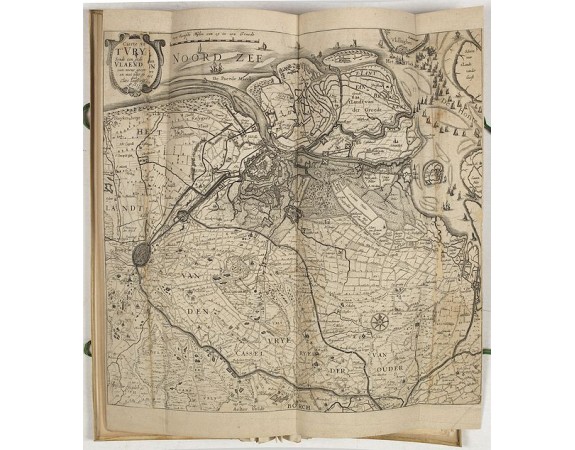 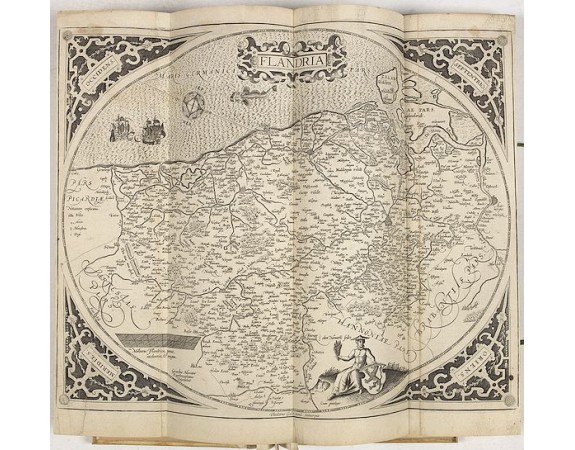 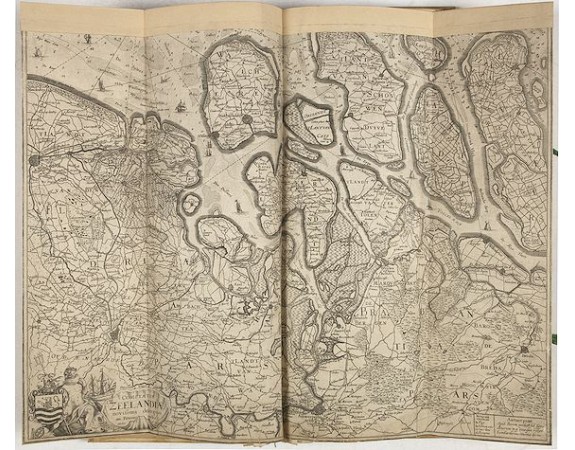 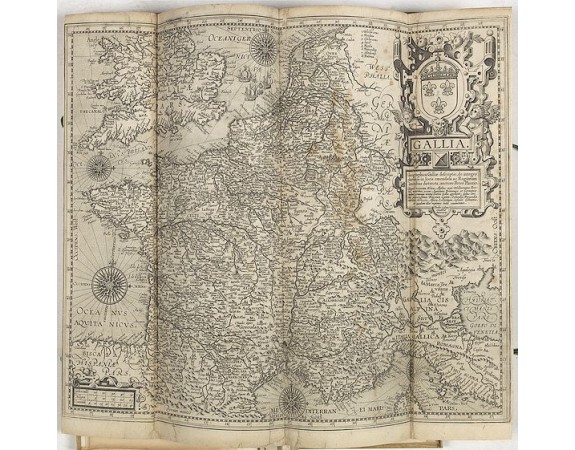 Genesis of the atlas

In 1612 Theodoor Galle started planning to publish loose-leaf folio sheets of the Netherlands and neighbouring regions (Gallia, Germania, Palatinata) with the possibility for the buyer to compile them into an atlas of the Netherlands.
Galle first published a map of Central Netherlands in two sheets for which he used the copperplates of the wall map of the Seventeen Provinces of 1605, which had been purchased by the “Officina Plantiniana” after the death of Vrients in 1612.
Theodor Galle also had both the copper-plates of Ortelius’s Theatrum and those of De Jode’s Speculum at his disposal; both sets had also been acquired by the “Officina Plantiniana” after the death of Vrients in 1612.
In the 1620s Theodor Galle added his name to 10 maps of the Ortelius copperplates. At publication of this atlas (ca. 1633) Galle apparently preferred, with some exception, the copper-plates of the Theatrum.

This early composite atlas includes the only known example of Hessel Gerritsz’ Leo Belgicus map in the third state of copperplate II.
Separate maps bearing the imprint of Theodor Galle are scarce and composite atlases as this one are very rarely seen on the market or in institutions.
So far only two Ortelius atlases of the 25 printed in 1641 have been located.

2 Theodore Galle: Gallia. Geographica Galliae descriptio, with Galle's Antwerp imprint, after Pieter Plancius.
A reissue of the map of France which was first published in the English edition of the Theatrum (1606).

3. Th. Galle /. Inferioris Germaniae Provinciarum nova description.
A reissue of Philippe Galle’s folio map of the Seventeen Provinces, known from the edition of Vrients from 1606.

4- Th. Galle / Abraham Ortelius: Brabantiae, after Jacob van Deventer's map, without text, and with Galle's Antwerp imprint.
A reissue of the map of Brabant which appears in Ortelius’s Theatrum from 1570 until 1592.

- 5 Th. Galle / Gerard Mercator: Flandriae, without text, and with Galle's imprint.
Third state published par Th. Galle: fortifications along the Scheldt River are added and the entire plate was touched up (information supplied by Mr.F. Gittenberger).

12 - Th. Galle /Abraham Ortelius: Lutzenburgensis . . . descript, after Jean Surhon, without text, and with Galle's imprint.
A reissue of the map of Luxembourg which was included for the first time in Ortelius’s Theatrum of 1579.

14 - Th. Galle / Abraham Ortelius : Lorraine. Lotharingiae nova descriptio, without text, no imprint except for that of Ortelius.

16 - Abraham Ortelius: Gelriae, Cliviae. . . descriptio, after Christiaan 's Grooten, without text, and with Galle's imprint.
A reissue of the map of Gelderland appearing in Ortelius’s Theatrum from 1570 until 1592.

18 - Th. Galle / Abraham Ortelius. Palatinatus Rheni, without text, this copy with the imprint of Galle, however.
A reissue of the map by De Jode in the Speculum Orbis Terrae (Antwerp, 1593).

19 - Abraham Ortelius: Westphaliae . . . descriptio, after Christiaan's Grooten, without text or the Galle imprint. Restoration of 17 cm in the engraved area at right part with some missing part of the map.
Theodoor Galle (1571-1633) was the son of the Antwerp engraver, publisher and friend of Ortelius, Filip Galle, from whom he learned the art of engraving. He spent some time in Italy before settling permanently in Antwerp where he set up as an engraver and print-seller. His marriage to Catharina, second daughter of Jan Moretus and Martina Plantin, in 1598 led to a close collaboration with the Plantin printing house, publishers of the Ortelius atlas. Through these family ties, he gained access to the plate-stock of the “Officina Plantiniana”.

Gerritsz, Hessel. Nova XVII Provinciarum Germaniae Inferioris tabula, Leonis effigie, accurate delineata, amsterdam, 1622.
Leo Belgicus by Hessel Gerritsz : the lion passant facing left.
Only known copy of this third state of copperplate II. In a composite atlas, apparently put together by Theodor Galle. (Van der Heijden, Leo Belgicus, 16.3).
The second state issued by David de Meyne (1569 - ca. 1620), came from the property of his colleague-publisher Cornelis Claesz., known to have worked together with Plancius, and quite a number of Plancius’ maps later issued by De Meyne, originally belonged to the list of Corn. Claesz.
This third state identical with the second one but for the following alterations:
- The imprint was changed to “Tot Amsterdam Bij Broer Iansz en Iacob Piertersz. Wachter A° 1622”.
- At the bottom in rectangular frame a new Latin poem: “Leo Loquitur (…)” (“The lion speaks. Just as my huge body has muscular limbs, you can see in my body powerful countries. How good would it be if, united in everlasting peace, each province assisted the others”).
Interesting is the new Latin poem at the bottom. The publishers considered the wording “Leo loquitur” (…)” far more comprehensible to the general reader than the mock scholarly ‘prosopopoeia” (personification).

The lion-map abounds with historical and political information. It was the lion map’s purpose to pass on national values and to further political and historical consciousness.

Careful comparison of the varying texts of the two epigrams yields further evidence for the map’s emblematic feature. The first epigram, “Prosopopoeia Leonis Belgici”, dates from the birth period of the map around 1608. Both Spain and the Netherlands had exhausted themselves warring against each other, and the Twelve Years’ Truce promised to bring the much needed period of rest. The epigram comprises three elements:
1 - the lion is a personification of the Netherlands
2 - the lion is a symbol of bravery and strength, dreaded by all
3 - the country yearns for peace, though.
Fourteen years later, however, in 1622, when Broer Jansz. reprinted one of the copperplates, the situation had utterly changed. It became increasingly clear that the Northern Netherlands were going to win their battle for freedom, but with the diminishing of external threats, internal discord reared its head. The Twelve Years’ Truce was a period of strong internal antagonism. The princes of orange wanted to reconquer the Southern Netherlands; the upper middle classes wished for peace in order that commerce and prosperity could flourish. Religious dissension was involved in the conflict. Not so much the enemy but factional strife and intrigue beset the country.

The second epigram has three principal elements:
1 - This time the lion speaks for himself: “Leo loquitur”
2 - The lion’s limbs, the provinces, are truly strong
3 – but they should support each other, not fight.
Being a true emblem, it serves to admonish and educate.
There are two types of this Leo Belgicus : the 'lion rampant facing right' engraved by Hendrik Floris van Langeren; and the 'lion passant facing left', which was introduced by the engraver Hessel Gerritsz, who masterfully engraved it in copper. The publication history of the latter is complicated, however, and was only unraveled in the course of Van der Heijden's research. What complicates the story is that Hessel Gerritz engraved two almost identical copperplates in the same period, each of which was subsequently published by a series of publishing houses in Amsterdam.

The Netherlands, depicted in the form of a lion originated with the Austrian Michael von Aitzing (c. 1530-98), who inserted in his book De Leone Belgico (1583) a Leo Belgicus map, engraved by Frans Hogenberg. In the preface of this work von Aitzing explains why he chose this particular title and inserted the lion map. He explains that Caesar mentioned in his "Commentaries" that the 'Belgae' were the strongest tribes, and he therefore decided - partly because of the religious conflicts in the war against Spain - to introduce the Netherlands in the shape of a lion.

Based on 0 reviews. - Write a review
95,000€
564 views
Add to Cart
Ask Question
Add to Wish List Compare this Product