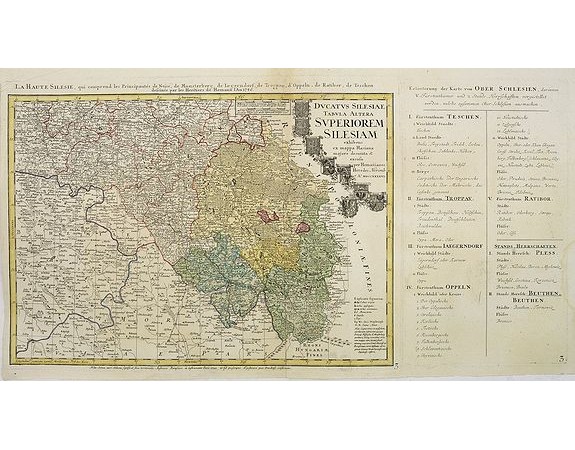 Detailed map of the South eastern part of Silesia, centered on Opole, with title cartouche including coat-of-arms of Teschen, Ratibor, Oppeln, Troppav, Iaegerndorf, T.Frankfest., Neise and Mansterb.
Published in Atlas Silesiae Id Est Ducatus Silesiae Generaliter Quatuor Mappis Nec Non Specialiter XVI Mappis Tot Principatus Repraesentantibus Geographice Exhibitus of 1750, but map already engraved in 1736.
The land survey was done by J. W. Wieland, and corrected by M. v. Schubarth. With a large very attractive cartouche in the upper left corner.
The Atlas Silesiae, was a large scale atlas of Silesia, Polen. With 4 general maps and 16 large scale detailed maps, all with amazing decorative cartouches. During the reign of Karl VI (1711 – 1740) the measuring of Silesia was started by the engineer lieutenant Johann Wolfgang Wieland (died 1736) who finished his task in 1732.
In 1735, Homann Heirs were assigned to publish the maps in an atlas. A revision of the maps was started in 1736 by the engineer lieutenant Matthäus von Schubarth (who died 1758). In 1736 the copper plates of the princedoms Breslau, Brieg and Sagan were ready to be printed. However, the atlas could not be published before 1750 when Friedrich II of Prussia (1740 – 1786) gave up his initial resistance against finishing the project.
The atlas was for a long time the only governmental mapping of Silesia.
Based on 0 reviews. - Write a review
200€
165 views
Add to Cart
Ask Question
Add to Wish List Compare this Product