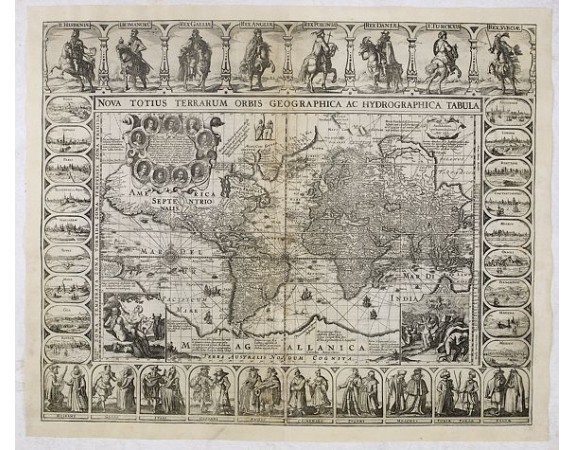 Re-issue by Janssonius of the rare world map by Dirck Lons (1622), based on van den Keere. The interior of North America is occupied by a cartouche surrounded by portraits of nine geographers, explorers and world circumnavigators : Ptolemy, Columbus, Vespucci, Magellan, etc.
The legend in the cartouche refers to their voyages. The bottom corners show the Temptation and the Expulsion of Adam and Eve from the Garden of Eden. The map is framed with decorative borders showing eight sovereigns on horseback, ten pairs of costumed figures and eighteen town views in oval frames, such as Rome, Paris, Jerusalem, Constantinople and Havana.
One of the most handsome single-sheet world maps of the period.
Based on 0 reviews. - Write a review
17,500€
171 views
Add to Cart
Ask Question
Add to Wish List Compare this Product