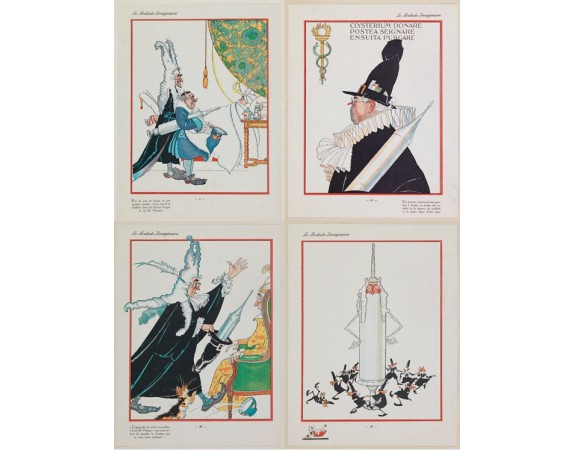 A set of four humorous illustrations all from the "Le Malade Imaginaire" - numbers 68, 48, 6, 61. Plate 68 has no caption, but shows a smiling, frothing syringe, with hands on hips surrounded by dancing witches. Small vignette of a small dog beside a pestle and mortar.

Plate 48 has a caption that roughly translates as: "I hear some great news", Mr Purgen exclaimed. "You refused to take the enema that I ordered you!".

Plate 6 has a caption that roughly translates "There was not a day when Argan did not take some remedy. Also, he was Dr. Purgen and Mr Fleurant's best client."

Plate 61 has a caption that reads: "A doctor, having posed a question to Argan showed himself to be very satisfied with the candidate's response, and deemed him worthy of being received."
The caduceus is shown, and is the traditional symbol of Hermes, and features two snakes winding around an often winged staff. It is often used as a symbol of medicine.
Based on 0 reviews. - Write a review
300€
18 views
Add to Cart
Ask Question
Add to Wish List Compare this Product