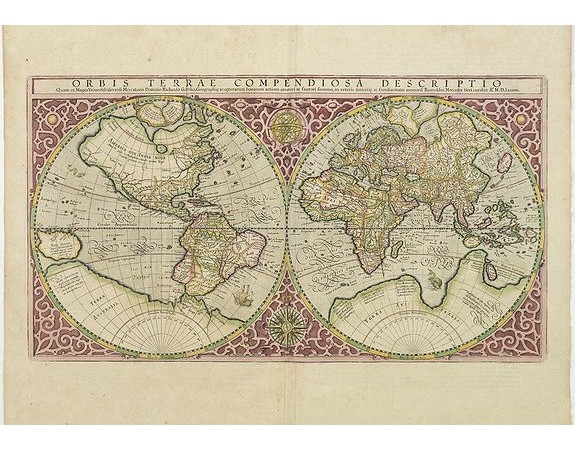 Gerard Mercator's great world map of 1569 was condensed into double hemispherical form by his son Rumold. It first appeared in 1587 in Casaubon's edition of Sreabo's Geographia with columns of text beneath the map and was later incorporated by his son Rumold Mercator into the long-lived and influential Atlas from 1595 onwards. This particular example with French text on verso is from the first French edition published in 1609.

The engraving is a model of clarity and neatness, with typical cursive flourishes to the lettering of the sea names. Surrounding the hemispheres is a strapwork border: between them at the top is an armillary sphere and at the bottom an elaborate compass rose.
Based on 0 reviews. - Write a review
7,000€
441 views
Add to Cart
Ask Question
Add to Wish List Compare this Product