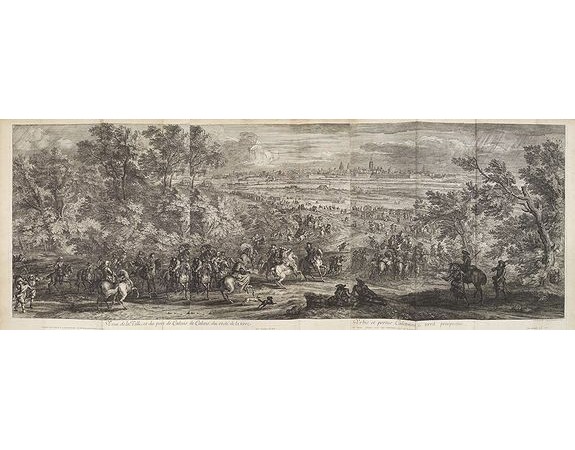 Showing the town of Calais; landscape with, in the left foreground, group of cavalrymen led by an officer and going to right, at right two soldiers walking alongside a cavalryman; woods on either side; beyond infantry troops marching towards the city of Calais.
Etching by Franz Ertinger, (1640-1710?) after Adam Frans van der Meulen (1632-1690) who was a Flemish Baroque painter specialising in battle scenes. He was active first in Brussels, where he was a pupil of Pieter Snayers, and from the 1660s onwards in Paris.
His paintings during the campaigns of Flanders in 1667 so delighted Louis that from that date van der Meulen was ordered to accompany him in all his expeditions. In 1673 he was received into the Académie royale de peinture et de sculpture, attained the grade of councillor in 1681, and died full of honors in Paris in 1690.
Based on 0 reviews. - Write a review
1,000€
129 views
Add to Cart
Ask Question
Add to Wish List Compare this Product