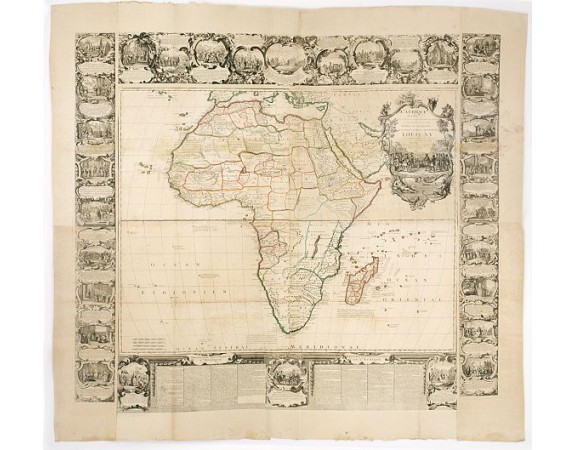 A rare and monumental wall map of Africa, with original outline colour, of four joined sheets, surrounded by text and vignettes printed on separate sheets.
Created in 1739 by Jean-Baptiste Nolin II (1686-1762), largely based on an earlier maps produced by his father. The map is surrounded by thirty vignettes that depict various events from Greek, Roman, Jewish, Christian, and Islamic history. In turn, each vignette is set within an elaborate baroque frame of a unique design, accompanied by textual narratives. The extensive text along the lower margin is entitled "Description Géographique de l'Afrique."

Showing the Nile somehow connected to the Niger River, even though both rivers flow in different directions to terminate at points thousands of miles apart.
Furthermore, the written descriptions of the continent's inhabitants are replete with archaic legends of bizarre and monstrous races.
The map is surrounded by thirty vignettes that depict events from African history, with much attention paid to French and Dutch commercial activities.

While the geographical depiction of most of the continent is quite assured for the time, this map is one of the eighteenth-century's most fascinating experiments in cartographic speculation.

Jean-Baptiste Nolin managed to marry decorative ornamentation with the most advanced rendering of geographical detail. The artistic élan of his compositions evinced a style that preserved the rhetorical ambitions of the Baroque ethic, while anticipating the playful elegance of the Rococo period. His masterpieces, many like the present wall map, were monumental in scale and represented Nolin's desire to overwhelm his competition in what was a very challenging market.
With the address "Paris: Chez l'auteur rue s.Jacques au dessous de la rue Mathurins a l'Enseigne de la Place des Victoires, 1739".
Based on 0 reviews. - Write a review
13,000€
388 views
Add to Cart
Ask Question
Add to Wish List Compare this Product