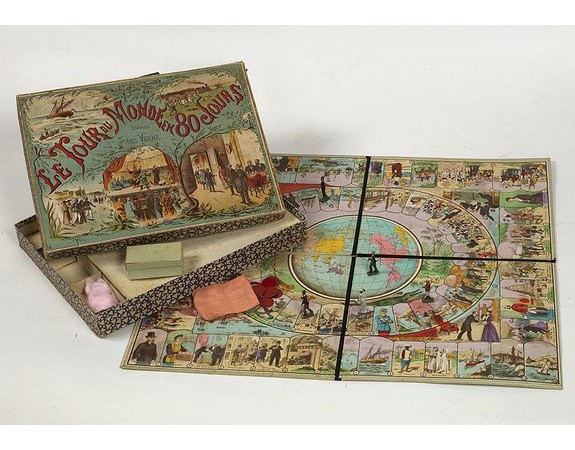 Vignette illustrations numbered from 1 to 80, captioned in French and arranged counter clockwise, encircle a representation of a world globe and jungle background.
The game block illustrates the Statue of Liberty in New York Harbour (dedicated in 1886 many years after Verne’s 1872 book). Other sites in America illustrated in game blocks include a view of Chicago streets, and cable cars in San Francisco. The diverse illustrations also include a Japanese juggler and the Suez Canal (opened in 1869). Singapore, Hong-Kong, Calcutta, Bombay, etc.
The first two numbered blocks on the game board depict Phileas Fogg (identified as "Phileas Phogg") and his French assistant, Jean Passepartout, as they leave London.
The final four “blocks” are the corner areas in between the smaller illustrations, in numbers 79 and 80 Fogg, upon his return to the Reform Club in London, points to a clock to emphasize that he's returned on time, and meets his fellow members to collect his winnings.
The illustration numbered 77 bears the monogram "JFJ" of the manufacturer, the Société des Jeux et Jouets Français, a consortium of French game manufacturers active between 1904 and 1931.

The 6 lead game pieces for this board game, are 3 dimensional representations of some of the major characters of the novel: Phileas Fogg, Jean Passepartout, Miss Aouda, Detective Fix, Brigadier General Sir Francis Cromarty (accompanied Fogg in India), Captain Andrew Speedy (Captain of the steamship Henrietta).

Set in Victorian England, Verne's novel tells the story of adventurer Phileas Fogg, who bets fellow members of the Reform Club in London that he could make a round-the-world trip in record time.

Provenance : Eric André Weissenberg collection, which has been preserved at the Weissenberg Museum.
Eric André Weissenberg, born in Agen, France on March 11, 1941 and died in Geneva on October 30, 2012, is a Swiss vernien collector.
He is one of the most prolific authors of articles for the Bulletin of the Jules Verne Society (BSJV). From collections of editions of cartoons, mainly from Hetzel, which he accumulated throughout his life, he became a recognized specialist in the particular characteristics of the Hetzel volumes and for many years held the section of the collector of the BSJV. He also participates in the collection of Philippe Jauzac Jules Verne - Hetzel and cartonnages illustrated, published by the editions of the Amateur and is the author of Jules Verne: A fabulous universe (Favre, 2004) where he exhibits of many unpublished documents from its collections.

In addition, Eric Weissenberg was also a collector of documents related to the Holocaust.