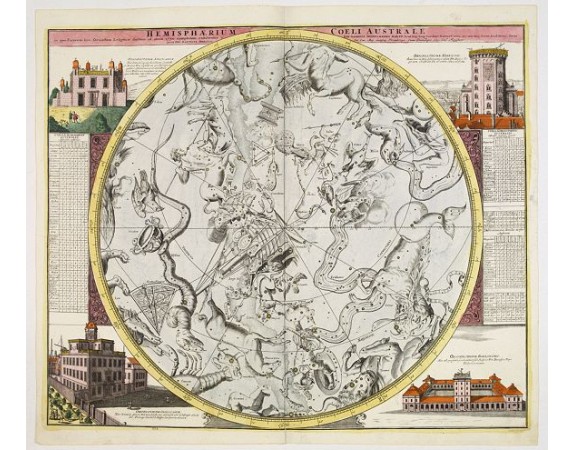 Magnificent celestial chart drawn by the famous scientist Johann Gabriel Doppelmayr.
Large circular charts of the southern hemisphere constellation, with decorative vignettes of celestial monsters and animals.
The tables along the sides identify and describe the constellations on the chart.
Doppelmayr was an astronomer of high repute. He was born at Nuremberg in 1677 and was educated at Halle University.
He was a professor of mathematics in his native city for nearly fifty years, and for some time made a speciality of lunar observations' (Brown, Astronomical Atlases, Maps and Charts p. 51).
His reputation was such as to gain him memberships in the Academia Caesarea Leopoldina, the academies of Berlin and St. Petersburg, and the Royal Society of London . . . His major work is the Atlas novus coelestis . . .
Besides star charts and a selenographic map, Doppelmayr's Atlas includes diagrams illustrating the planetary systems of Copernicus, Tycho, and Riccioli. The elliptic theories of Kepler, Boulliau, Seth Ward, and Mercator. The lunar theories of Tycho, Horrocks, Newton and Halley's cometary theory.
The positions of the stars on the maps are correct for the year 1730.

Based on 0 reviews. - Write a review
2,200€
107 views
Add to Cart
Ask Question
Add to Wish List Compare this Product