Loeb-Larocque Rare Maps and Books has more then 27 years of expertise in old maps, atlases and illustrated books. If you are considering selling separate items, or a complete collection, please do not hesitate to contact us for advice.
We purchase immediately, or act as an expert for Parisian auction houses like Binoche et Giquello, PIASA, Daguerre, Rossini, Kahn-Dumousset, Libert.

Some results achieved in recent Auctions

PLACIDO CALOIRO et OLIVA [or workshop]. [Portulan de la Méditerranée]. Messine, ca. 1621 et 1665. 71,5 x 44,5 cm. Manuscript sea chart pen and ink drawn on vellum measuring 71.5 x 44.5 cm.
Sold for 22.000 euros
Elaborately decorated in the traditional style of portulan charts. In very good condition except for two sections where the vellum is missing. On the western edge, a strip about 30 cm wide has been lost and in the southeast a small section of the corner has been torn away.
Despite these losses, the actual coverage area of the chart has not been significantly impacted. 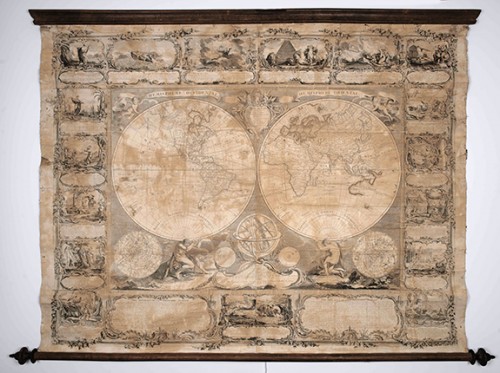 Wall map of the world published in Paris, depicting the Eastern and Western hemispheres supported by two male figures, decorated at the bottom right and left with two celestial hemispheres (boreal and southern) and at the bottom in the middle with an armillary sphere, in addition, surrounded by decorative borders made up of vignettes depicting scenes from Genesis. This map is most notable for its depiction of the Sea of Japan labeled "Mer de Corée" and of "Mer de L'Ouest" or Sea of the West - a great sea, easily the size of the Mediterranean, to flow from the then-known Strait of Juan de Fuca. Australia and New Zealand are depicted in typical post-Tasman form,

Folio. Engraved title-page, 26 engraved maps and plans of the Atlantic seaboard on 13 full sheets and 5 half sheets. Blue paper boards. Calf label with the inscription « Brest N° » pasted on first board. FIRST EDITION. This “American Neptune” was published for the use of the French navy during the American Revolution, by order of Antoine de Sartine (1729-1801), then Minister of Marine (1774-1780), and a great modernizer of the French navy.

Followed by 4 pages of an alphabetical list of the maps in manuscript. The maps are numbered  in pen and ink at the top right corner. The most recent map is dated 1661. 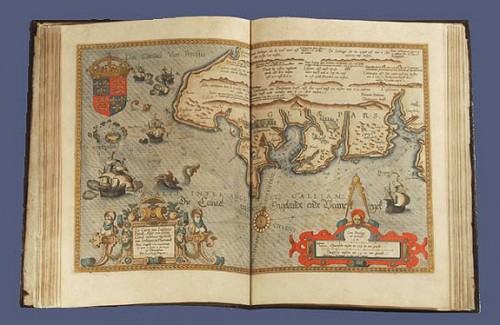 See more items in this auction 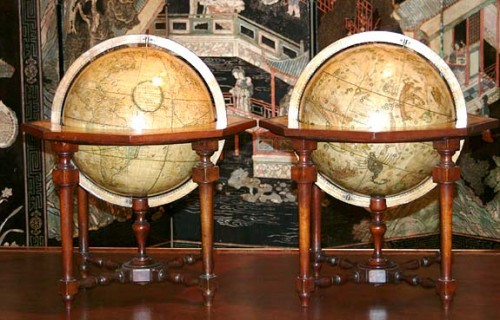 Pair of globes by G.M. Cassini

Rome, terrestrial dated 1790, celestial 1792. Each globe covered by 12 printed, hand-coloured, gores, with polar calottes. The meridian circle, paper laid on wood, the horizon ring with zodiac and calendar scales on a octagonal frame supported on fruit-wood stand, the four legs united by cross-strechers carrying the centrepost.