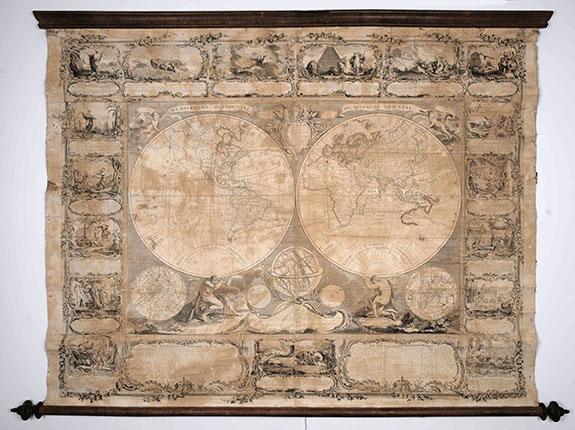 First state of this wall map of the world published in Paris, depicting the Eastern and Western hemispheres supported by two male figures, decorated at the bottom right and left with two celestial hemispheres (boreal and southern) and at the bottom in the middle with an armillary sphere, in addition, surrounded by decorative borders made up of vignettes depicting scenes from Genesis. This map is most notable for its depiction of the Sea of Japan labeled "Mer de Corée" and of "Mer de L'Ouest" or Sea of the West - a great sea, easily the size of the Mediterranean, to flow from the then-known Strait of Juan de Fuca. Australia and New Zealand are depicted in typical post-Tasman form, however, unlike other French cartographers at the time who tended to join New Guinea to Tasmania in a single and highly creative, imaginary coastline, Janvier leaves those undiscovered coastlines blank.
Early Dutch discoveries are noted in Australia and New Zealand, as are other recent discoveries around the world. The tracks of Magellan, Vasco da Gama and Francis Drake are shown. This map shows an early copy of a Buache type 1 Mer de l'Ouest.

Wall map printed from four plates, dissected in 40 pieces and backed on linen. Overall slightly browned, a few water staining and brown spotting. Linen worn along folds. Copper engraved map on paper, in later colours. 960 x 1240mm. Rare and decorative wall map of America. The map is surrounded by vignettes depicting crucial historical incidents or episodes of discovery and exploration: Découverte de l'Amérique, Conquête de l'Empire du Mexique, Découverte du Détroit de Magellan… With two title-cartouches, as well as captions in French and Spanish. It is possible the map was intended for the Spanish market. Depicting all the major early explorer's trails. With an inset map that indicates a Northwest Passage based on the supposed voyage of the apocryphal Admiral de Fonte. The map figures also the fictitious "Mer de L'Ouest". The publisher Mondhare has retained the mythical depiction of the Sea of the West in North America and offers a number of tantalizing options for a northwest passage, while also including a massive nascent depiction of Alaska and the Aleutian Archipelago, which was then at the end of a 40 year period of debate between the theories of the Paris based De L’Isle family of mapmakers, the English cartographer Thomas Jefferys and the Russian Academy.
Reference: Don McGuirk, The Last Great Cartographic Myth: Mer de l’Ouest, 56.

Béatrice Loeb is for more than 30 years an expert for maps and atlases to be sold at auctions held by leading auction houses as Binoche & Giquello, PIASA, Ader Nordmann, Daguerre, Rossini, Nouvelle Etude, Kahn-Dumousset, Libert at Drouot.

Member of SFEP (Syndicat Français des Experts Professionnels en Oeuvres d'Art et Objets de Collection). Founded in 1945, the SFEP is the oldest organization representing professional appraisers in fine art and antiquities in France.
Our auction catalog descriptions are made in accordance with the guidelines laid down by the SFEP.