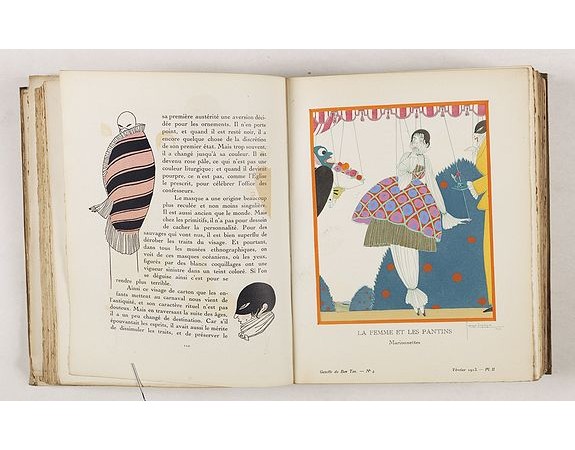 La Gazette du Bon Ton was a leading French fashion magazine that was published from November 1912 to 1925.
The extremely rich and vivid colors were achieved through the labor-intensive pochoir hand coloring. In this method, a special stencil was made for each individual color. Complex pieces were printed using a large number of stencils, resulting in a beautiful and original piece of art.
The full page illustrations are by George Lepape, Pierre Brissaud, A. Marty, Bernard B. de Monvel, J.Gosé, Paul Méras.
Founded in 1912 by Lucien Vogel, the magazine covered the latest developments in fashion, lifestyle, and beauty.
The magazine strove to present an elitist image to distinguish itself from its many competitors. It was available only to subscribers and was priced at a steep 100 francs per year, or $425.61 in today's money.
The magazine was published on fine paper.
The magazine signed exclusive contracts with seven of Paris's top couture houses (Cheruit, Doeuillet, Doucet, Paquin, Poiret, Redfern, and Worth) so that the designers' fashions were shown only in the pages of the Gazette.
The magazine's title was derived from the French concept of bon ton, or timeless good taste and refinement.

The magazine also aimed to establish fashion as an art alongside painting, sculpture, and drawing: according to the magazine's first editorial, "The clothing of a woman is a pleasure for the eye that cannot be judged inferior to the other arts."
To elevate the Gazette's literary status, the magazine featured essays on fashion by established writers from other fields, including novelist Marcel Astruc, playwright Henri de Regnier, decorator Claude Roger-Marx, and art historian Jean-Louis Vaudoyer.
Their contributions ranged in tone from irreverent to ironic and mocking.

The centerpiece of the Gazette was its fashion illustrations. Each issue featured ten full-page fashion plates (seven depicting couture designs and three inspired by couture but designed solely by the illustrators).
It employed many of the most famous Art Deco artists and illustrators of the day, including Georges Barbier, Erté, Paul Iribe, Pierre Brissaud, and Georges Lepape, who all, rather than simply drawing a mannequin in the outfit, like most previous fashion illustrators, depicted the model in various dramatic and narrative situations.
Based on 0 reviews. - Write a review
3,500€
144 views
Add to Cart
Ask Question
Add to Wish List Compare this Product