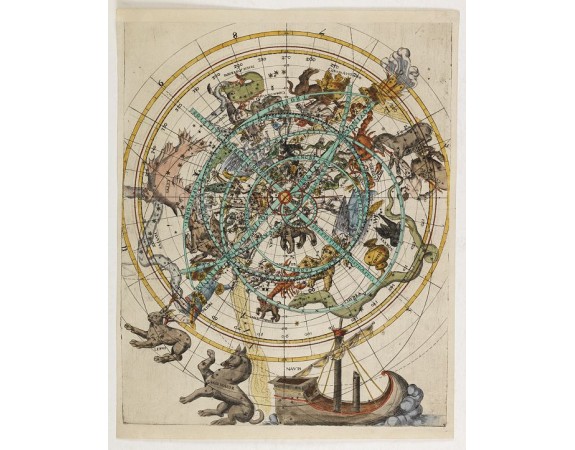 Probably by the Vienna astronomer Melchior Klayber who used the Copernican precession theory, which is closely connected with the chart (Ptolemy - 6° 40' and Ptolemy - 55° epoche).
In counting the total number of spheres, like other sixteenth-century astronomers Copernicus considered not only the theory of precession but the entire structure of cosmos.

Beautiful et decorative celestial planisphere with a pasted volvelle. The chart shows the stars visible from 52 degrees latitude in a polar equidistant projection. The volvelle has been meticulously cut and is pasted-on the planisphere.
The volvelle includes the polar circle, named "Circulus Articus", both tropics named ‘Tropicus Capricorni’ and ‘Tropicus Cancri’.
Also including "Solstiti Hyber Colurus" (winter) and "Solstitior Solsti Aesti" (summer) solstice.
A solstice is an astronomical event that occurs twice each year as the Sun reaches its highest or lowest excursion relative to the celestial equator on the celestial sphere.
Also the two equinoxes every year – in September and March – when the sun shines directly on the equator and the length of day and night is nearly equal are named.

The solstices, together with the equinoxes, are connected with the seasons. In many cultures the solstices mark either the beginning or the midpoint of winter and summer.
The iconography of the constellation north of the ecliptic is a close copy of the northern map by Dürer of 1515 which is also a stereographic projection from the north ecliptic pole. The map shows only the classical Ptolemaic constellations.

The circular border around the sky divided in 360°.
The paper has watermark mentioned Piccard database #24004, the item is therefore likely printed in Vienna around 1569.
Based on 0 reviews. - Write a review
4,000€
130 views
Add to Cart
Ask Question
Add to Wish List Compare this Product