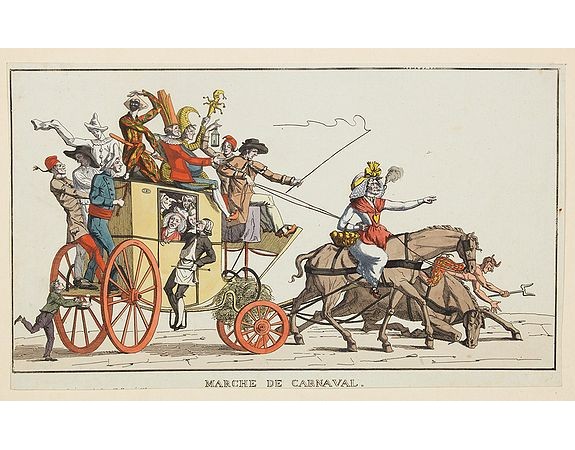 A colourful print of a coach load of assorted people and 'characters' en-route to the Paris carnival. The Paris Carnival is a carnival in the city of Paris in France. It occurs after the Feast of Fools and has been held since the sixteenth century or earlier, with a long 20th century interregnum.
We see in the print an old woman carrying a basket of apples sitting astride one of the coach horses, smoking a pipe , pointing the ahead. A 'devil' sits on top of the other (collapsed) coach horse, the coach driver, with reins in hand, cracks the whip, behind him, on top of the coach, are an assortment of harlequins, jesters and fools. Inside the coach we see the faces of a few occupants, a physician in an apron, hangs on to the door, holding a large syringe in his free hand. On the back running board we see a few more carnival characters in high spirits. A young boy holds on to, and runs behind the coach.
0 reviews - Write a review
150€
211 views
Add to Cart
Ask Question
Add to Wish List Compare this Product