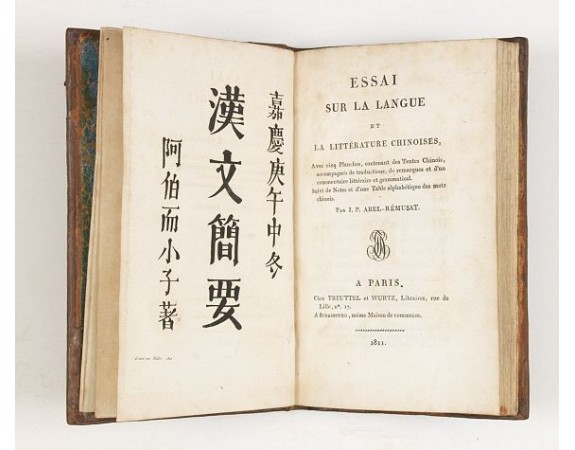 Rare first edition.- The French sinologist Jean-Pierre Abel-Remusat (September 5, 1788 - June 2, 1832) was born in Paris and educated for the medical profession, but a Chinese herbal in the collection of the Abbe Tersan attracted his attention, and he taught himself to read it by great perseverance and with imperfect help. At the end of five years of study he produced in 1811 the work "Essai sur la langue et la littérature chinoises".- Lightly browned and slightly brown stained, spine renewed.

The bookplate is a typical armorial of the mid-nineteenth century with the name Bibliotheca Lindesiana below the arms (Lindsay quartering Abernethy) and the crest and motto above (endure fort: endure boldly).
"The library's origins may be said to go back to the late sixteenth century with the establishment of the Lindsay family at Balcarres in Fife by Lord Menmuir, whose bibliophilic son David, the first Lord Balcarres, augmented it to a position of distinction among Scottish libraries. Its status was severely reduced through succeeding years and generations until the mid-nineteenth century and the appearance of Alexander William, twenty-fifth Earl of Crawford and eighth earl of Balcarres (1812-1880, called Lord Lindsay for most of his life)."
Based on 0 reviews. - Write a review
2,500€
402 views
Add to Cart
Ask Question
Add to Wish List Compare this Product