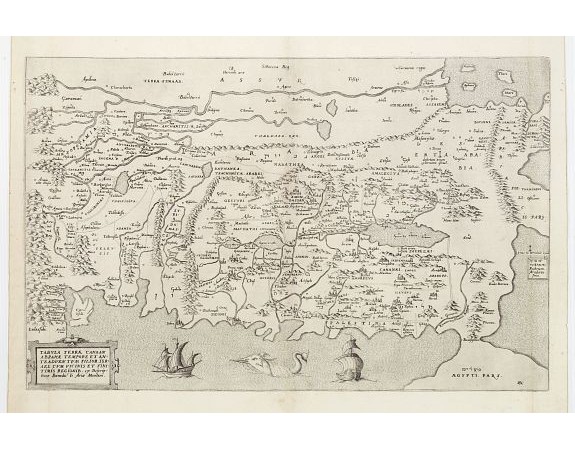 Map of Canaan at the times of Abraham and before the conquest by the Children of Israel, with the neighboring regions. Oriented to the east. The shore line runs from Turkey as far as Egypt, and inland from the Mediterranean as far as Babylonia. The shore line of Palestine is most distorted.
Shows a big Haifa bay, does not mention either Haifa or Acco, but does mention Mount Carmel. The Mediterranean is connected by a river with the Lake of Tiberias. Many names are in Hebrew lettering also.
From Benedictus Arias Montanus' Liber Chanaan. Also in his rare Biblia Polyglotte and based on Marinus Sanudo's map of the Holy Land, of c. 1320.
Based on 0 reviews. - Write a review
1,800€
161 views
Add to Cart
Ask Question
Add to Wish List Compare this Product