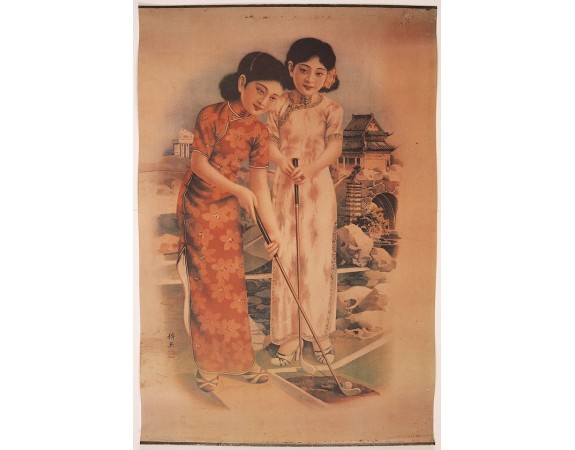 This poster, an advertisement from the 1930s, depicts two young girls playing golf.

It shows the rise of Western type advertising during the economic boom in early 20th century Shanghai when the Art Deco movement brought from Europe greatly influenced local fashion, art and architecture. Today, this type of poster is prized by collectors and preserved in museum collections both for its artistry and for the unique glimpse it gives of the past.

The 1920s and 1930s were decades marked by persistent war and disorder in China, but this period in Chinese history was unique and dramatically different than the years that followed. Known as the Republican period, these decades involved an incredible boom that transformed both commerce and culture. Unlike the difficulties faced by most of the western world during the Great Depression, China enjoyed a boom in its consumer markets unlike anything that had been seen before. Activity was centered in Shanghai, but involved many other parts of the country as well.

The advertising posters that emerged during this period reflected this prosperity. The most notable posters advertised cigarettes and liquor, but there were ones promoting firms in other industries, including many western firms. Most included portraits of beautiful women along with the advertised products and luxury settings. The posters show a once thriving face of China that is not much different from today. They have become a cultural treasure favored by collectors, not just in China, but around the entire world. Many of them are scarce as these posters were confiscated and destroyed during the Cultural Revolution that followed.
0 reviews - Write a review
225€
441 views
Add to Cart
Ask Question
Add to Wish List Compare this Product