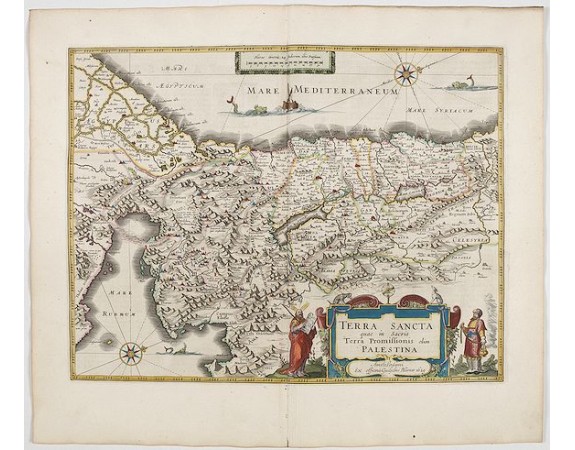 The Holy Land, Promised Land or Palestine. Oriented to the west. Shows the entire Palestine on both sides of the Jordan, the shore line running from Tripoli as far as the Nile Delta. The Jordan river on its way through the Lake of Merom, the Sea of Galilee down to the Red Sea is shown distorted. The Dead Sea itself has a distorted fantasy shape. The title cartouche is flanked on either side by Moses and Aaron. French text on verso.
From early on Willem Jansz. Blaeu aimed of publishing an atlas to compete with the Hondius-Jansson Atlas. By 1630, he had published at least 17 folio size maps.
Blaeu was able to realize his plan soon after he had acquired the copper plates of the atlas maps by Jodocus Hondius. The "Appendix followed in 1630.
In 1635 he finally realized a "international edition" of a world atlas, the "Theatrum Orbis Terrarum".
Based on 0 reviews. - Write a review
900€
128 views
Add to Cart
Ask Question
Add to Wish List Compare this Product