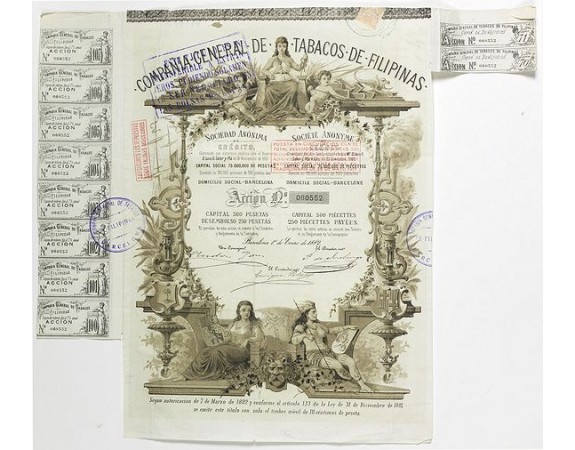 Beautifully engraved certificate from the Compania General De Tabacos De Filipinas issued in 1882. This historic document has an ornate border around it with a vignette of allegorical women and children holding shields and a globe oriented to show the Philippines.

Tabacalera was the popular name of Compañia General de Tabacos de Filipinas S.A. - Compañia de Filipinas - which was founded in November 26, 1881 by a Spaniard from Santander, Antonio Lopez Lopez, the first Marques of Comillas.
He was a financial genius who parlayed his work adventures in Cuba and Latin America into a steamship companies and trading businesses. He was the most influential Spanish businessman of his generation and counted the Prime Minister and the King as his personal friends.

Tabacalera was a private enterprise he founded with the sole intention of taking over the Philippine Tobacco Monopoly from the Spanish colonial government. Its incorporators were the Sociedad General de Credito Inmobiliario Español, Banque de Paris and Bank of the Netherlands. It was founded to take over the tobacco factories that the Spanish government possessed in the islands, as well as to develop agriculture, trade, and industry.

Tabacalera was one of the oldest leaf tobacco dealers in the world and the first Spanish trading company to be quoted on the stock exchange of both Madrid and Barcelona.
Tabacalera dedicated itself to exporting tobacco from the Philippines to the Spanish Tobacco Monopoly. During its heyday, Tabacalera exercised almost a monopolistic control on the whole Philippine tobacco leaf industry. It took over 5 tobacco plants from the colonial government but soon opened a start of the art factory in 1895 called La Flor de la Isabela.

It opened a distribution and logistics operations to sort, trade and prepare tobacco and acquired properties in San Antonio, Santa Isabel and San Luis in Cagayan Valley. It also established a shipping company Compañia Transatlantica and Tabacalera Insurance Co..

It expanded into many non-tobacco activities and grew rapidly until the Philippine Revolution of 1898. With the American colonial government as a new master in the Philippines, Tabacalera losts its special status in the island and had to adjust to the competitive pressures of the world market.

Nevertheless it expanded into abacca, copra, sugar, interisland shipping and liquor. It established Hacienda Luisita and founded La Flor de la Isabela, one of the biggest cigar factories in the world. After World War I, it plowed its investments into sugar milling and rice trading. It enjoyed a boom in revenues and profits even as its tobacco exports declined which its sugar and copra businesses more than made up for. It became the Philippines' biggest sugar and coconut exporter. At its peak it became the biggest Philippine employer. Hacienda Luisita alone employed more than 6,000 Filipino and 200 Spanish nationals.

From 1900 to 1940 Tabacalera's fortunes went boom and bust with the Philippine economy and was subjected to the many sugar quotas imposed by the US Congress. At the end of World War II the company's installation were destroyed, bt slowly the businesses were rebuilt. From the 1950s to the 1970s Tabacalera experimented with expanding into other international regions such as Latin-America, France and Indonesia.

Its main lines of businesses were export of tobacco to Algeria, Belgium, Morocco, Switzerland, Germany and Spain, the cultivation of sugar cane (centered in San Carlos, Negros and the Central Azucarera in Basi, Negros, import-export between southeast Asia and Europe, and the representation of European products in the Philippines, such as Renault, General Electrica Española and Sociedad Española de Construccion Naval, among other.

Unlike other American trading companies, Tabacalera specialized in dealing with dark air-cured tobacco, an increasingly difficult product to market in the competition of light Virginia leaf offered by American companies. Its near monopoly position in the Philippines and its hegemony over the economy (at one time Tabacalera duties supplied more than 30% of Philippine government revenues) deteriorated rapidly past the 1970s.

Being the leading Philippine company of its day, Tabacalera sponsored many cultural activities. It established many schools for its workers. It collected ethnological items for the famous 1887 Exposition General de las Islas Filipinas in Madrid, Spain. In 1883 it created the most magnificent Filipiniana library in its headquarters in Ramblas Barcelona, with no other than the leading bibliographer of the day Wenceslao E. Retana.

Please note: This item is a collectible only and does not represent ownership in the company. This item is either cancelled, and in case it is not, it represents an entity which no longer legally exists.
Based on 0 reviews. - Write a review
150€
11 views
Add to Cart
Ask Question
Add to Wish List Compare this Product