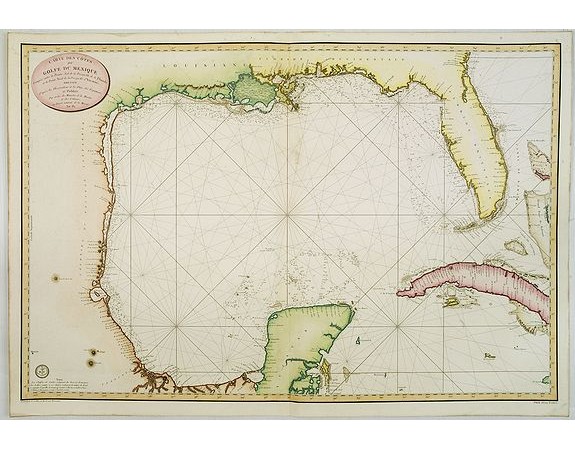 Detailed and important early chart of the Gulf Coast and Florida and dated 1800. From Neptune des cotes occidentales d'Amerique sur le Grand Ocean, an extensive atlas of charts of the western coasts of North and South America.
The chart was issued one year after the Spanish Carta Esferica and draws extensively from this map. This landmark mapping of Texas, Florida and the Gulf Coast, is based upon the 1799 Carta Esferica, the first large-scale printed chart of the Texas Coast based upon actual soundings and explorations.
The chart is based in large part on the landmark survey of the coast commissioned by Bernardo de Galvez and conducted by Jose de Evia. The most significant milestone of the survey was the discovery of Galveston Bay in 1785, which had never before appeared on a printed map. Baie de Calvesion (Galveston) is shown on the present map exactly as laid down in the manuscript maps from Evia's Survey.
The coastline configuration in the
Based on 0 reviews. - Write a review
4,000€
59 views
Add to Cart
Ask Question
Add to Wish List Compare this Product