DE BRY, Th. - Punishment of a criminal in China 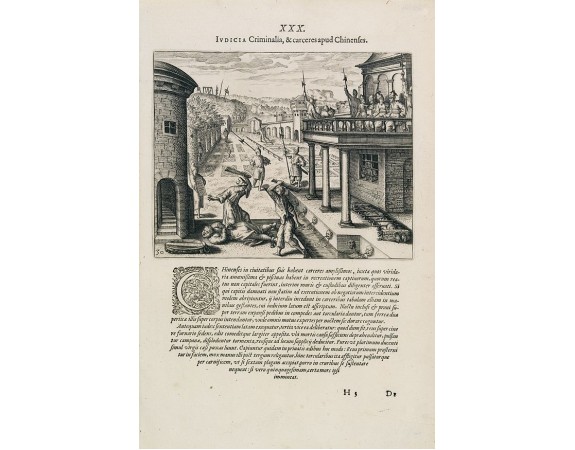 Punishment of a criminal in China from Linschoten's famous voyages to the East of 1583-92 here published by De Bry the year after they first appeared as a separate book. From Part II, PARS INDIAE ORIENTALIS, IN QU JOHAN. HUGONIS LINTSCOTANI NAVIGATIO IN ORIENTEM.
After his stay in the Indian city of Goa, Van Linschoten set out for Europe with a Portuguese return fleet in 1588. One of the ships was wrecked off the Azores in 1591. Van Linschoten was given the task of staying behind to protect the cargo. At the request of the Portuguese governor of the islands, Dom Christovão de Moura, he made a map of the city.

Theodore de Bry, a German engraver and book dealer, began a compilation of early voyages in 1590 and had published six parts at the time of his death in 1598. His widow, two sons, and another family member continued the work, which comprised a total of fifty-four parts when it was completed in 1630. The publication is in two series, denoted the Grands Voyages and the Petit Voyages. A German edition of the Petit Voyages was published in 1599 in Frankfurt am Main. A second German edition came out in 1616. Latin editions were published in 1609 and 1629.
Based on 0 reviews. - Write a review
100€
94 views
Add to Cart
Ask Question
Add to Wish List Compare this Product