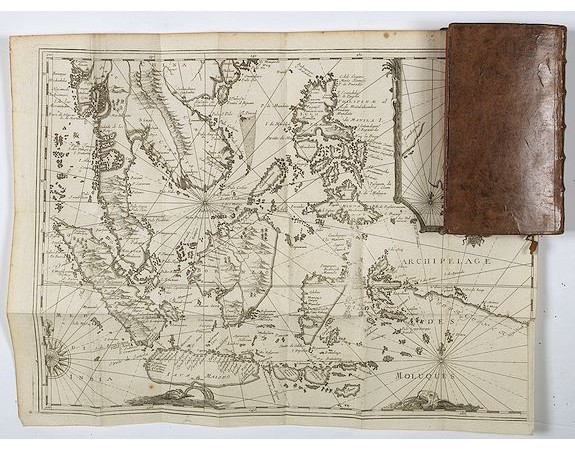 Important richely illustrated compendium of the first Dutch voyages to East India, of great interest for the history and establisment of the Dutch global trade, particularly in America, Asia and Oceania.
Some of the voyages here concern America, especially those of Olivier de Noort around the world by the Strait of Magellan, the trip of George Spilberg to the Moluccas by the same route, and the southern navigation of Jacques Le Maire and Willem Cornelisz Schouten.

Very nice example in uniform contemporary binding, composed of the 10 volumes of the voyages, to which are joined, as often, the 2 volumes of the Voyage of Gautier Schouten in the East Indies.

The volumes are illustrated with 8 frontispieces, a portrait of Schouten and 68 prints and maps, some folding.

Some very nice maps of Philippines and Manilla, among a large folding map : The map is an expanded version of De Bry's "Mar di India", with the inclusion of an inset map of Buton Straits (Botton I. 140x105mm.). The Straits of Buton, highlighted on the map, although narrow, were an important route for ships sailing from Batavia and Makassar to the Moluccas or Spice islands during the northerly monsoons.
Based on 0 reviews. - Write a review
4,250€
105 views
Add to Cart
Ask Question
Add to Wish List Compare this Product