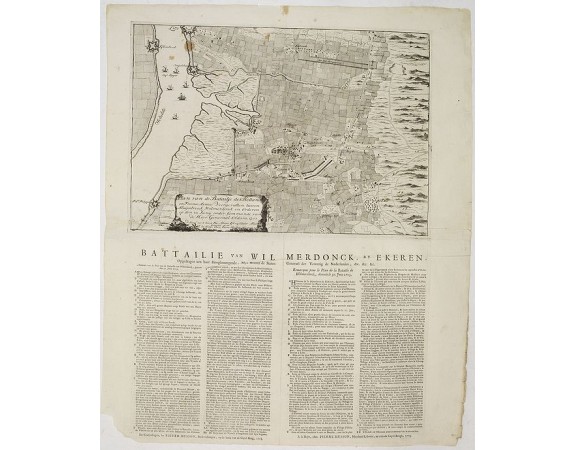 A broadside or occasionally broadsheet is a large sheet of paper printed on one side only and typically used as a poster to announce some event, proclamation or other matter.
Here giving notice of a battle between the Dutch and French army on June 30, 1703 near Ekeren, Kappellen en Brasschaat in present-day Belgium.
The map is 30x44cm and shows to the left the river Schelde with Liefkenshoek and the stronghold Lillo south of Antwerp. Showing the positions of both armies during the siege of 30 June 1703.
The lower half in letter press "BATTAILLE VAN WIL MERDONCK BY EKEREN", and a lettered key (A-BB) in Dutch and French.
Published by Pierre Husson (1678-1733) , who was a publisher of books and prints at The Hague in the late 17th-early 18th century. He was especially known for his publications of plans of battlefields and fortifications during the War of the Spanish Succession (1702-1713).
Based on 0 reviews. - Write a review
400€
84 views
Add to Cart
Ask Question
Add to Wish List Compare this Product