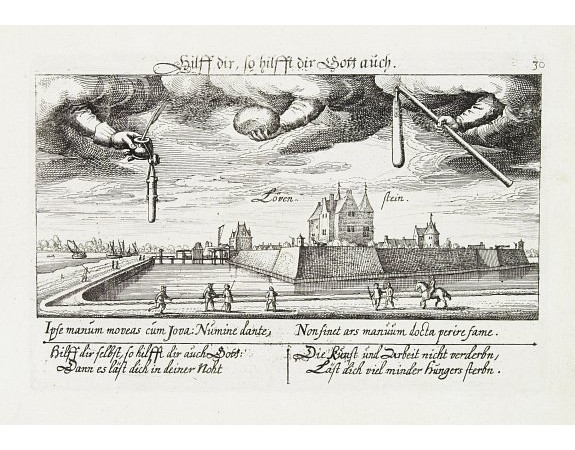 View of the castle Loevestein, near Gorinchem.. On the sky, three hands holding a quill, a stone and a stick are depicted. With a verse in two languages underneath the picture.
The poet Daniel Meisner from Komotau started his Thesaurus Philo-Politicus. Das ist Politisches Schatzkästlein guter Herren und bestendiger Freund... in Frankfurt in 1623, initially in parts, each one containing about fifty plans. The work was printed work and was printed by Eberhard Kieser. In 1678 the collection of copperplates was sold to Paul Fü, who continued the printing under the title
Based on 0 reviews. - Write a review
60€
276 views
Add to Cart
Ask Question
Add to Wish List Compare this Product