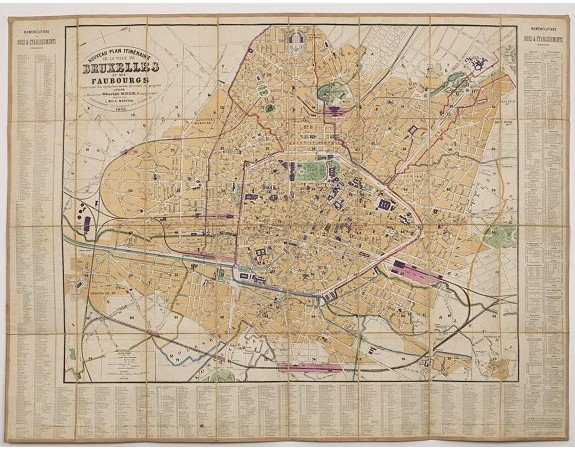 Decorative folding plan of Brussels, with to the right, left and bottom a key to the important street buildings and streets. Prepared by L.Mols - Marchal. This edition is obvious an updated state as the plan is now dedicated to Karel Buls (13 October 1837–13 July 1914) who was a Belgian politician and mayor of the City of Brussels from 1881 and remained in office until 1899.

At his initiative policemen had to be able to speak both French and Dutch and bilingual signposting was established throughout the city. He was in favour in preservation of old parts of Brussels. Buls was a steadfast defender and admirer of the Mont des Arts and the Grand Place.
Buls was an accomplished and prolific author, not merely on educational and artistic issues but also publishing accounts of his travels abroad.
Based on 0 reviews. - Write a review
250€
334 views
Add to Cart
Ask Question
Add to Wish List Compare this Product