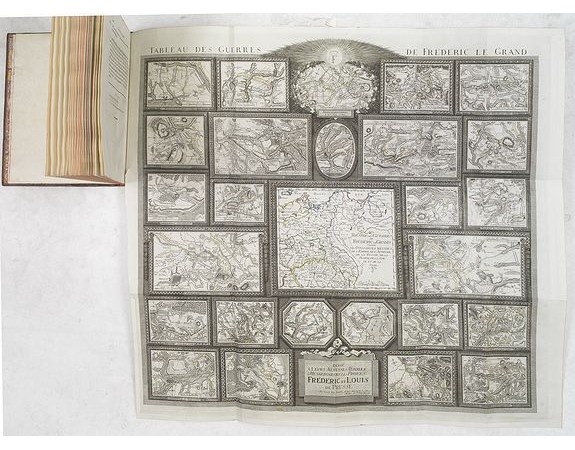 The book includes a large folded map "Tableaux des Guerres de Frédéric le Grand", showing a map of Prussia, with present-day Poland and Eastern Germany surrounded by 25 maps showing the battle fields of Frederic II. (i.e.: Starting with the Battle of Mollwitz, which his first battle, further more battles fields around Prague, Breslau, etc. The positions of the Prussian, Austrian, Russian and French troupes coloured in a contemporary hand according to the key.

In the center a lovely map of Prussia and present-day Poland.

Provenance : Bibliothèque des ducs de Luynes, Château de Dampierre. The library of the Dukes of Luynes from Dampierre Castle, one of the largest private libraries of France.
This illustrious family was closely linked to the history of France since the seventeenth century. The book has the coats of arms of Luynes family gilted on its spine.
This important library was founded by Marie de Rohan Montbazon (1600-1679), immortalized by Alexandre Dumas in his trilogy of the Musketeers and favorite wife of King Louis XIII..

Frederick II (24 January 1712 – 17 August 1786) was King in Prussia (1740–1786) of the Hohenzollern dynasty. He is best known for his brilliance in military campaigning and organization of Prussian armies.
Upon ascending to the Prussian throne, he attacked Austria and claimed Silesia during the Silesian Wars, winning military acclaim for himself and Prussia.
Near the end of his life, Frederick physically connected most of his realm by conquering Polish territories in the First Partition of Poland.
Based on 0 reviews. - Write a review
4,500€
265 views
Add to Cart
Ask Question
Add to Wish List Compare this Product