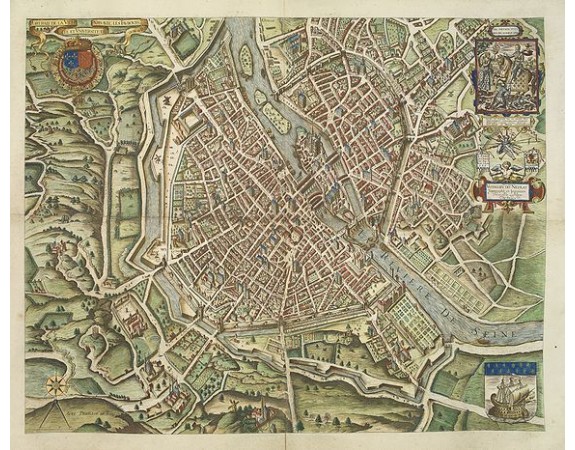 This very fine photogravure plate is showing Paris at medieval times after Nicolay. This late 19th century and slightly reduced facsimile of this famous and very rare plan originally published by Jean le Clerc in 1609.
In very attractive recent colouring. A decorative piece.

Shortly before the World exhibition in Paris in 1878 several facsimiles of the rarest plans of Paris were published in phogravure technique. (See Boutier, Les plans de Paris, 42 for the original print.)

The earliest forms of photogravure were developed in the 1830s by the original pioneers of photography itself, Henry Fox Talbot in England and Nicéphore Niépce in France. They were seeking a means to make prints that would not fade, by creating photographic images on plates that could then be etched. The etched plates could then be printed using a traditional printing press.
Photogravure in its mature form was developed in 1878 by Czech painter Karel Klíč, who built on Talbot's research.
Because of its high quality and richness, photogravure was used for both original fine art prints and for photo-reproduction of works from other media such as paintings and prints.
Based on 0 reviews. - Write a review
1,800€
137 views
Add to Cart
Ask Question
Add to Wish List Compare this Product