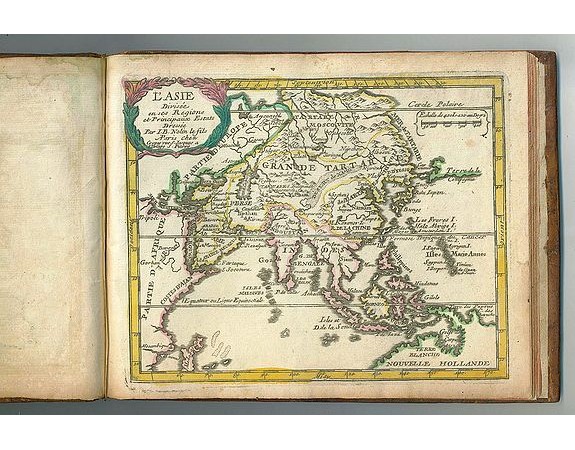 This atlas, published in Paris, by Crépy at "rue S. Jacques à l'image S. Pierre,", is apparently unknown, as are the included maps.

The maps are drawn by J.B. Nolin fils and are showing Europe, Asia, Africa, North America, South America, The Kingdom of France, Military Government of Picardy, Map of the Holy Land. The other maps only carry the address of Crépy. Only the map of Picardy engraved by Jenvilliers, is dated 1770. Germany is engraved by Desbrustins, England by Liebault and the Holy Land by Chambon.

Crepy the Younger (17 ..- 1796) was an engraver, publisher and print dealer, active between 1753 and 1790. He is the son of Louis Crépy and the nephew of Etienne-Louis Crepy. Despite significant editorial activity, he filed for bankruptcy in 1790.
Based on 0 reviews. - Write a review
2,500€
276 views
Add to Cart
Ask Question
Add to Wish List Compare this Product