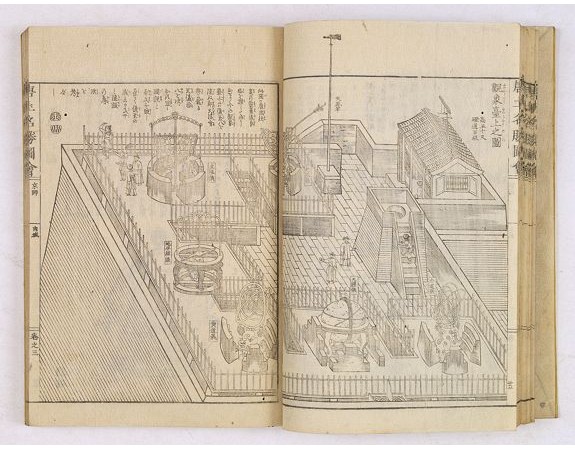 OKADA GYUKUZAN, OKA YUGAKU, OHARA TOYA MINSEI - Morokoshi Meisho Zue [Illustrated Description of Famous Sites of China].
Date: Osaka, Bunka 3, year of the tiger - 1806
Size: 225 x 180 mm.
Colouring: Uncoloured.
Condition: 6 volumes with original yellow paper wrappers, some soiling, with title and contents labels, the fourth one of which is a little bit defective, as shown the image. Thread partially untied, but binding is almost secure. As is often the case of this, impres

Very rare first edition, of the famous places of Qing dynasty in China, edited and illustrated by the Japanese artists Okada Gyokuzan (1737–1812), Oka Yugaku (1762–1833), and Ohara Toya (1771–1840).
Xylographic printing on mulberry paper. Text in Sino-Japanese with Japanese reading marks facilitating Japanese reading. The work is extensively illustrated with about 250 full-page woodcuts of which about 170 on double-page.
This work reflects the immense veneration of the Japanese educated classes towards Chinese culture.
This informative work is illustrated with historical and legendary scenes, topographical views, palaces, archaeological and sacred sites.
A full map of the Qing Empire of China with Korea is included as well as many city plans, for example of Peking, the Forbidden City and the Great Wall and its gates. Further there are illustrations of costumes, astronomical and musical instruments, the five holy Buddhist mountains, maps of major cities as well as the various provinces of the Qing Empire (1644-1912). Historical events and details from the classical literature are extensively explained. Many illustrations are related to the every-day life of the people, costumes, fire-arms, the fascinating Great Wall with its numerous military observation posts.
Chinese musical instruments and astronomical instruments, imported or made by the Jesuits are also displayed.
The description of the cities refers to their architecture and archaeological vestiges. Amongst the most interesting illustrations, let us mention a full map of the Qing Empire of China with Korea, another map of Peking, the Forbidden Imperial City with its impressive entrance gates, the imperial seala>
The double page plate of the astronomical observatory of Peking established by the Jesuits Johann Adam Schall and Ferdinand Verbiest, which is followed by a series of illustrations of the different observatory instruments.