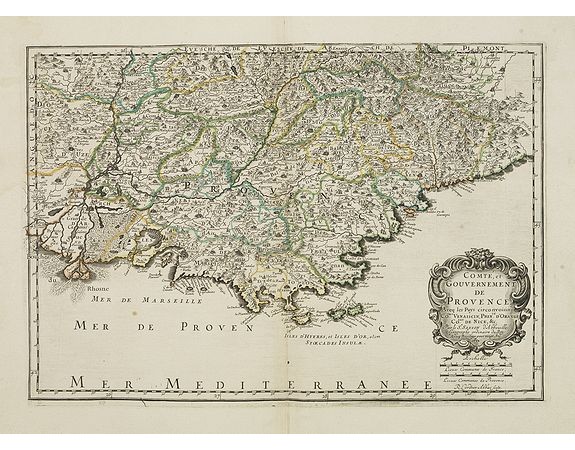 First state of this fine map of southern France, including the Provence. It extends along the Mediterranean coast from the mount of River Rhone in the west to "Vinitimille" and the Genovese border in the east. Detail extends northwards to Montelimar.
This edition carries the date 1652, engraved by Robert Cordier.
Nicolas Sanson was to bring about the rise of French cartography, although the fierce competition of the Dutch would last until the end of the century. His success was partly owing to the partnership with the publisher Pierre Mariette. In 1644 the latter had purchased the business of Melchior Tavernier, and helped Sanson with financial support in producing the maps. In 1657 Pierre Marriette died, however his son, also named Pierre, co-published Les Cartes Générales de toutes les parties du Monde. the following year. It was the first folio French produced world atlas.
Based on 0 reviews. - Write a review
500€
271 views
Add to Cart
Ask Question
Add to Wish List Compare this Product