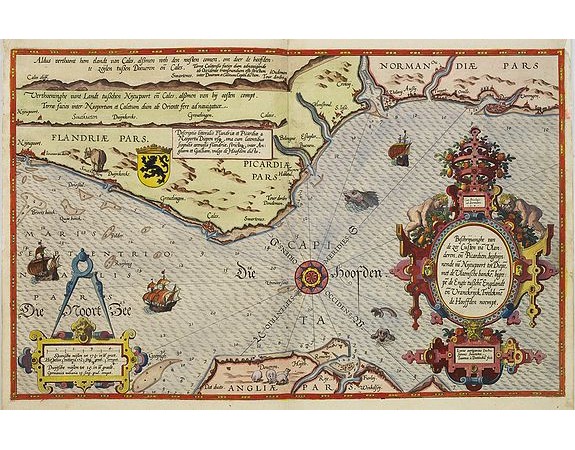 DUTCH TEXT EDITION. A detailed chart of the coast of Flanders and Normandy decorated by a large colorful baroque title cartouche, and the coat of arms of Flanders with a colorful scale cartouche decorated with a compass, a compass rose, several vessels and sea monsters.
From a early Dutch text edition of this landmark contribution to the science of navigation. Waghenaer's own personal experiences as a pilot along European coasts were used to compile the Spiegel der Zeevaerdt, the first edition of which was published in Dutch at Leyden in 1584/85 by the house of Plantin. Although advertised as published in 1584 according to Koeman this edition is more likely printed in 1585.
The chart is engraved by the famous artists Baptist and Johannes van Deutecom.
The chart showing soundings, sandbanks, landmarks and coastal profiles.
Based on 0 reviews. - Write a review
2,500€
156 views
Add to Cart
Ask Question
Add to Wish List Compare this Product