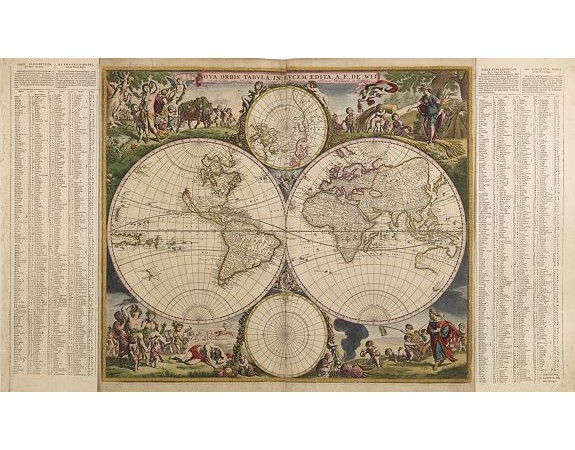 According to Shirley, De Wit's map is one of the most attractive of its time. The brilliant scenes in the corners combine images of the four seasons, the elements and the signs of the zodiac in a well-balanced and natural way.
There are several editions of this map. In the first plate, first state, the map lacked an outer border, and the cusps were blank. In state two cherubs were placed in the cusps and a border added.
This is the rare second plate, this newly engraved plate his now Nova Guinea and Quiri Regio on the left hand hemisphere. Also the "island of California" has no longer a flat northern coast line. Overall this plate is much more detailed.

If the map and text sheets are joined the oveall size would be 479 x 840mm.
Based on 0 reviews. - Write a review
5,500€
292 views
Add to Cart
Ask Question
Add to Wish List Compare this Product