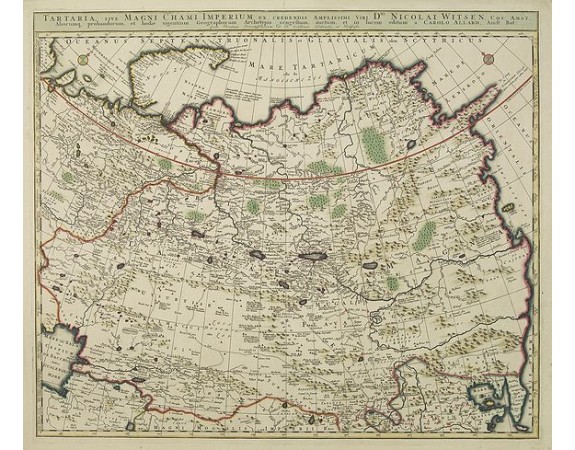 This map is particularly significant for its depiction of Russia, Siberia, and parts of Chinese Tartary, taken from the great six-sheet map by Nicolas Witsen, 1687. The importance of the Witsen map for a European understanding of northern Asia is unparalleled, it was simply “considered as one of the most remarkable maps of that time” -- Keuning.
A number of smaller derivative maps were soon published among this one by Allard.
At the age of 24 Witsen traveled to Russia, and a four-month stay in Moscow began his life-long obsession with the country. Many years later, Witsen would write, “‘T’is almost 28 years since I traveled into Russia… I have not ceased from that time, by various Methods I have found, to send Letters unto and received Answers from the most Northern and North-East parts of the World.”
In 1687, after over 20 years of research and study, Witsen published his great map of Tartary, and in 1692 issued an important treatise titled Noord en Oost Tartaryen. “The map, like the book, is one of the great rarities of literature,” writes Keuning, “the scarceness of the map and book is to be attributed to the fact that they were not put on the market but only presented to personal acquaintances.”
Based on 0 reviews. - Write a review
1,700€
229 views
Add to Cart
Ask Question
Add to Wish List Compare this Product