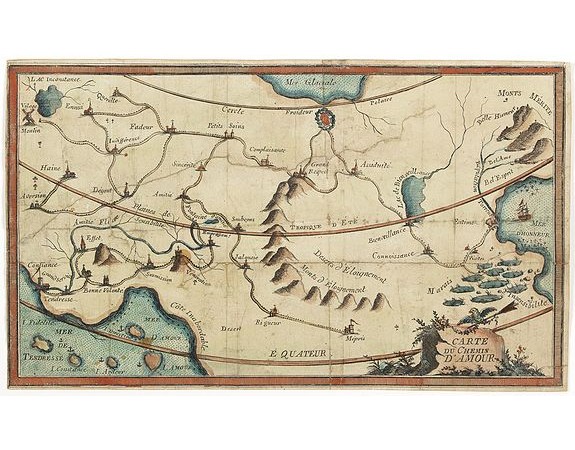 Among the allegorical maps of early modern times, those relating to romantic attachments, sexual relationships and marriage have long excited curiosity among students of literature and the history of cartography.

This maps describe states of married and non-married life, irrespective of social acceptability, and chart the course for the prospective matrimonial traveller.
Profoundly allegorical, closely tied to contemporary social and literary trends, and full of word play, the maps are not always easy to understand. The aim in this paper is to provide a comprehensive overview of the genre of 'sentimental' allegorical maps and an analysis of the literary and political situations which gave rise to them.
Their key role in gender issues and in the promotion of new ideals of femininity in France and England from the seventeenth to the nineteenth century is examined.

Anna Letitia Barbauld's poem ‘To Mr. Barbauld, with a Map of the Land of Matrimony’ (1775 -1825) and its illustrated companion piece, ‘A New Map of the Land of Matrimony, Drawn from the Latest Surveys’, first published anonymously by Joseph Johnson in 1772 but attributable to Barbauld, show their creator playing in original ways with courtly and libertine variants of the map of love and marriage: a genre of allegorical and sentimental map tracing its provenance to ‘La Carte de tendre’ or ‘The Map of the Country of Tenderness’, conceived by Madeleine de Scudéry for inclusion in her multi-volume prose romance Clélie (1654–61) and given illustrated form by François Chauveau.

Taken together, map and drawing indirectly serve to illuminate Barbauld's complicated position within Enlightenment feminism and invite new insights into her relationship with the canonical male Romantics, reaffirming her status as a key transitional figure between Neoclassicism and Romanticism in the contribution she makes to the historical debate over the relationship between different arts (and, more specifically, to the historical debate over the relationship between the visual and verbal arts).
Based on 0 reviews. - Write a review
500€
233 views
Add to Cart
Ask Question
Add to Wish List Compare this Product