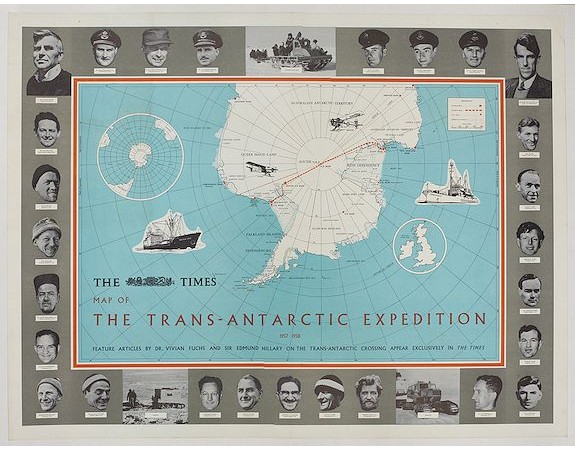 Original vintage advertising poster - The Times Map of the Trans-Antarctic Expedition 1957-1958 Feature articles by Dr Vivian Fuchs and Sir Edmund Hillary on the Trans-Antarctic crossing appear exclusively in The Times.
Great design featuring a map of Antarctica marking the South Pole in the center of the historic expedition route line between Shackleton Base and Scott Base - the first overland crossing of Antarctica via the South Pole that was led by the explorer Dr Vivian Fuchs (1908-1999) and the mountaineer and explorer Sir Edmund Hillary (1919-2008) - with black and white images of the supporting planes above and ships at sea (the Endeavour and the Magga Dan).
The Times newspaper logo and text below, surrounded with a border of black and white photos and names of the Commonwealth expedition team members and photos of a Muskeg tractor, Sno-Cat and Weasel vehicles. Stylized lettering on the bottom of poster.
0 reviews - Write a review
2,000€
1166 views
Add to Cart
Ask Question
Add to Wish List Compare this Product