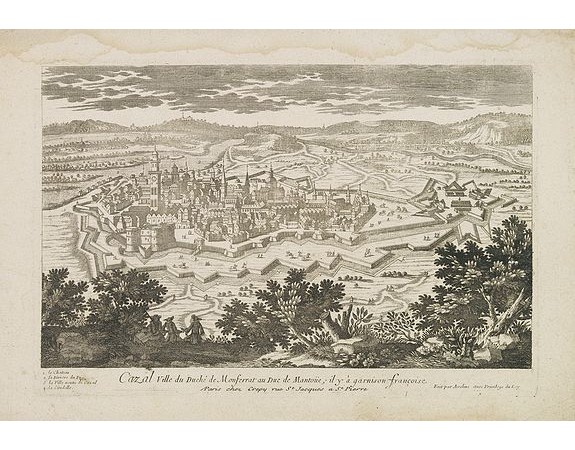 A rare panoramic town-view of Casale Monferrato in the Piedmont region. Engraved by Pierre Aveline (Paris, c.1656 - 23 May 1722). He was also a print-publisher and print-seller. He probably trained with Adam Pérelle and, like him, specialized in topographical representations. He engraved in suites many views of Paris and of provincial, European and African cities, mixing etching and burin. In 1685 he obtained a royal license for ten years, authorizing him to reproduce 'le profil des maisons royales'. Among the 412 items that comprise his œuvre, there are only two portraits and two prints of historical subjects. The print carries the privilege du Roy .
With the publishers address of Crepy. Etienne Louis Crepy (c.1700-1759) was active as an engraver and publisher active at rue St.Jacques a St.Pierre in Paris. He was specializing in maps and geographical prints. In 1731 he acquired the stock of copper plates of topographical content from his father Jean Crepy.
Collectors item!.
Based on 0 reviews. - Write a review
150€
248 views
Add to Cart
Ask Question
Add to Wish List Compare this Product