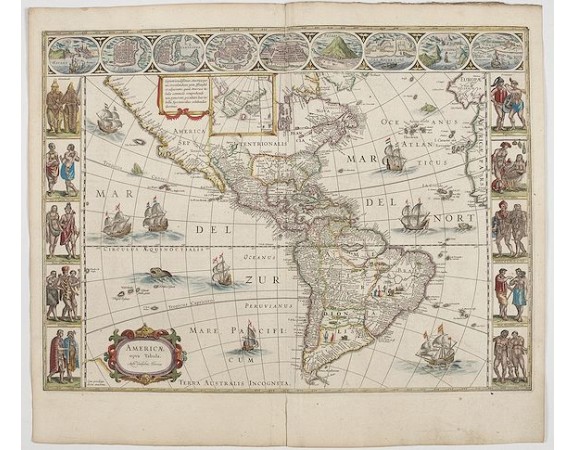 An inset shows Greenland and Iceland. Decorative elements include ships, sea monsters and vignettes of native Americans within South America. In addition, map is bordered by a series of nine maps and birds-eye views at the top (including Cusco, Havana and Mexico City) and ten ethnographic views of various Native Americans.

The delineation of the coast and the nomenclature on both the Pacific and Atlantic coasts are basically Spanish in origin and follow the maps of Ortelius and Wytfliet. To these Willem Blaeu has inserted on the East Coast the English names given by the Roanoke colonists in Virginia and by Frobisher, Davis and Hudson to the far north.
He has added French names in Florida and along the St Lawrence. European geographers still had no knowledge of the extent of the Mississippi. From the expedition journals of De Soto (1539-43) they had inferred an extensive range of east west trending mountains north of the Gulf of Mexico, precluding any great river system.
The Great Lakes were as yet unknown, although Champlain had reached Huron and had heard of the lakes from Coral Indians and had, in 1632, published his own map showing the region.

More about maps by Willem Blaeu. [+]
Based on 0 reviews. - Write a review
7,500€
320 views
Add to Cart
Ask Question
Add to Wish List Compare this Product