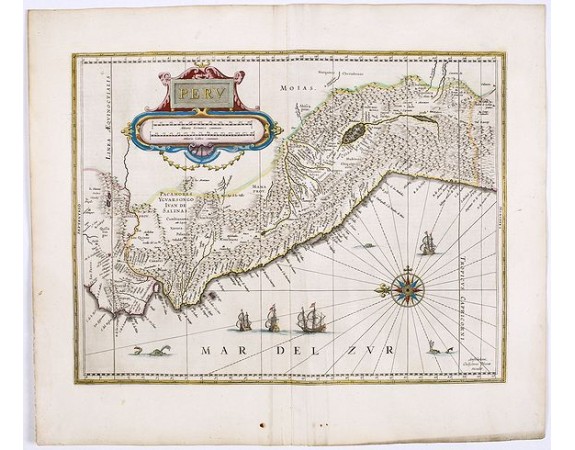 FIRST EDITION, FIRST ISSUE OF THIS MAP. Decorated with ships and monsters in the sea. Orientated with east at the top. With the signature of G. Blaeuw lower right corner. Shows the Pacific coast of South America from Ecuador (at the left-hand side) as far south as the Atacama desert in the northern reaches of Chile.
"As early as 1520, Spanish settlers in Panama had heard tales of a powerful civilization rich in gold that lay to the south, and in 1522 an expedition was organized to find this land and the people called Birú or Pirú in the south.
In 1524 Francisco Pizarro led the first of his expeditions that led ultimately to the discovery and conquest of the Inca empire which extended over wide areas of modern Ecuador, Peru, Bolivia and part of Chile.
Pizarro obtained from Atahuallpa, the head of the Inca empire, a huge ransom of silver and gold that made Spain rich almost beyond the most inventive dreams of the Spanish conquerors, and once the mountain city of Cuzco was captured in 1533, the Spanish hold over much of South America was virtually complete." (John Goss)

From early on Willem Jansz. Blaeu aimed of publishing an atlas to compete with the Hondius-Jansson Atlas. By 1630, he had published at least 17 folio size maps. Blaeu was able to realize his plan soon after he had acquired the copper plates of the atlas maps by Jodocus Hondius. The "Appendix followed in 1630.
In 1635 he finally realized a "international edition" of a world atlas, the "Theatrum Orbis Terrarum".
Based on 0 reviews. - Write a review
900€
22 views
Add to Cart
Ask Question
Add to Wish List Compare this Product