BOWEN, E. - A Map of the King of Great Britain's Dominions in Europe, Africa, and America. 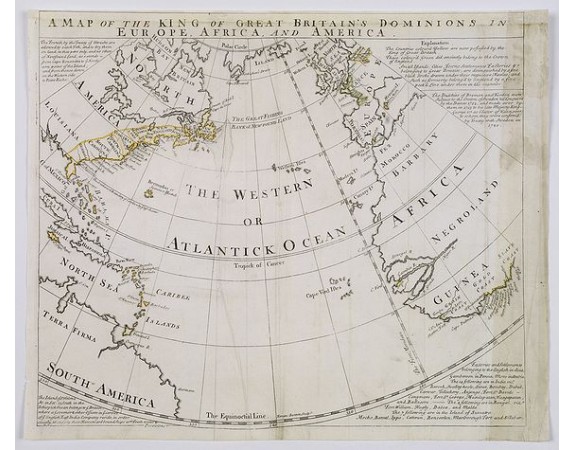 BOWEN, E. - A Map of the King of Great Britain's Dominions in Europe, Africa, and America.
Date: London, ca. 1740
Size: 375 x 440 mm.
Colouring: In original o/l colours.
Condition: Map has had creawses flattened out, repairs to upper border, with some MS fill in, some discolouration to right margin and map. Top margin tight. Good impression.

An extremely rare map of Great Britain's empirical reaches in the mid 18th century on a curious circular projection. Map shows the eastern coasts of North and South America, the West Indies, Great Britain, Spain and Portugal and part of France, Morocco and the western coast of Africa.
In North America the map names Nova Scotia, New England, New York, Pennsylvania, Maryland, New Jersey, Virginia, North Carolina, South Carolina and Georgia (first recognized as a colony in 1733).
In Africa, part of which is referred to as "Negroland", the Grain Coast, Gold Coast and Slave Coast are all mentioned.

The informative surrounding text describes the color coding of the map, the Treaty of Utrecht (which among other things, detailed the relationship between the French and the British in North America in 1713), a treaty with Sweden in 1720, a list of British settlements in Asia and a description of the Island of St. Helena.
Based on 0 reviews. - Write a review
500€
25 views
Add to Cart
Ask Question
Add to Wish List Compare this Product