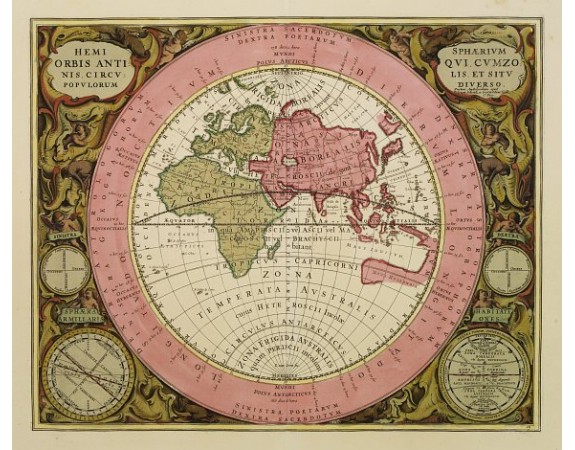 A chart showing the eastern hemisphere, including north eastern coast of Australia with, superimposed, climatic zones and planetary details. Surround by most decorative scrollwork and cherubs.
This map shows Australia rather crudely represented, however it does take into account the Dutch discoveries up until and including Tasman's second voyage in 1644, although Tasmania just falls outside the physical limits of the map.
Andreas Cellarius (active from 1656-1702), Dutch mathematician and geographer, rector of the Latin School at Hoorn. He may have been of German or Polish origin, with the name of Keller or Kellner. Cellarius adopted the system of Julius Schiller who renamed all constellations known at that time and sketched them again in order to fit the sky into a system of Christian symbolism.
In Cellarius' Atlas Coelestis Schiller's system has been elaborated further. In fact, Schiller became more widely known by Cellarius' atlas than by his own work.
From: Atlas Coelestis seu Harmonia Macrocosmica. Peter Schenk and Gerard Valk reissued the copperplates of the original Cellarius atlas in 1708. These plates, identified by the addition of the new publisher's imprint on the title banner.
Based on 0 reviews. - Write a review
22,000€
428 views
Add to Cart
Ask Question
Add to Wish List Compare this Product