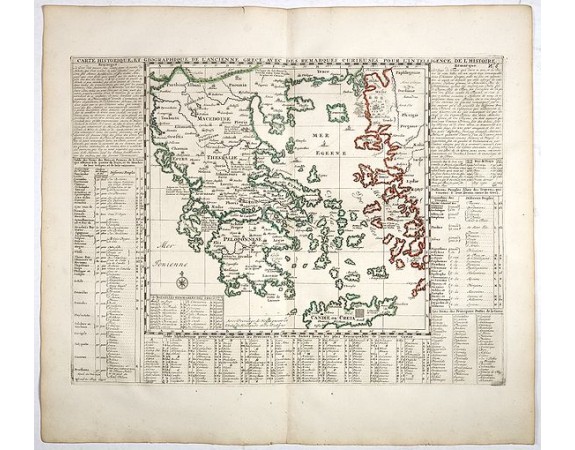 A map of Greece during the Roman Empire, with descriptive French text, from Chatelain's monumental 7 volume Atlas Historique. In upper right margin: 'N°6.

Henri Abraham Chatelain (1684 – 1743) was a Huguenot pastor of Parisian origins. He lived consecutively in Paris, St. Martins, London (c. 1710), the Hague (c. 1721) and Amsterdam (c. 1728). He is best known as a Dutch cartographer and more specifically for his cartographic contribution in the seminal seven volume Atlas Historique, published from 1705 to 1720.
The atlas, though published anonymously, is generally known to have been the work of the Chatelain family. Ground-breaking for its time, this work included studies of geography, history, ethnology, heraldry, and cosmography.
Based on 0 reviews. - Write a review
100€
124 views
Add to Cart
Ask Question
Add to Wish List Compare this Product