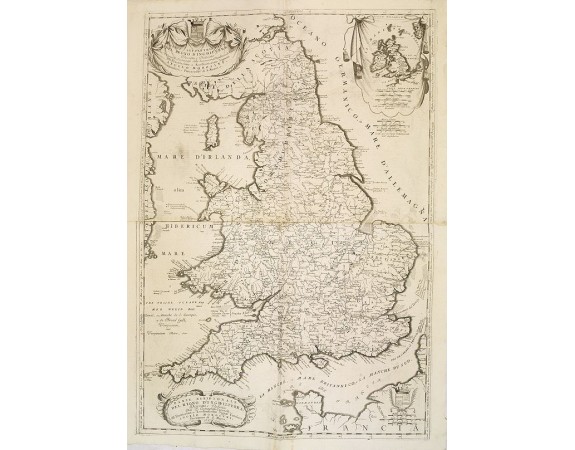 A beautiful and flamboyantly engraved two sheet map of British Isles, including four large cartouches and table of counties, towns, etc. Shows towns, mountains, rivers, lakes, islands, bays, churches and other features. One of the most sought after large format 17th century decorative maps of England.

The map is the product of the late 17th century Venetian cartographer, Vincenzo Coronelli.
A decorative title cartouche appears bottom left in the form of a banner supported by playful winged mermaids and cherubs.
The remarkable Vincenzo Coronelli (1650-1718), encyclopaedist, geographer, inventor and Doctor of Theology, was citizen of the Republic of Venice.
He was also one of the most prominent mapmakers and publishers in Europe of his day.

More about Coronelli. [+]
Based on 0 reviews. - Write a review
500€
375 views
Add to Cart
Ask Question
Add to Wish List Compare this Product