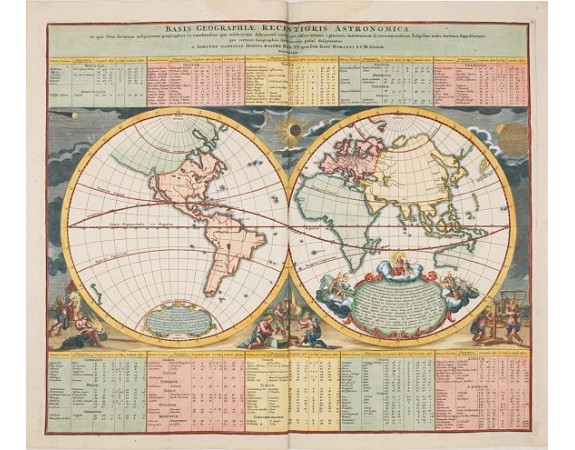 Baroque period world map in double hemispheres showing the shapes of land masses exactly calculated from astronomical observations. Roundel vignettes show cherubs making the observations and the instruments used.
The continents are shown in outline form. In North America California is an island and there is a hint of a possible Northwest Passage from Hudson Bay to the Strait of Anian.
In the Eastern Hemisphere, Japan is shown twice. Australia connected to New Guinea.
The lower part scenes including cherubs using a variety of contemporary instruments at an observatory. In the center, a solar projector is used to measure the eclipse of the sun in the spandrel directly above. On the right, longitude is being determined by observing the transit of the moons of Jupiter in the upper left corner. Shirley refers to this map as being 'neglected' and considers it "in advance of its time."
Based on 0 reviews. - Write a review
800€
503 views
Add to Cart
Ask Question
Add to Wish List Compare this Product