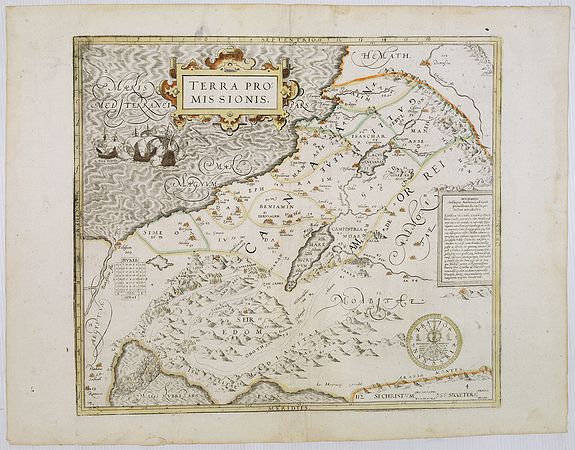 A beautifully executed and very rare map of the Promised Land, divided into the 12 Tribes. The shore line runs in north-southwesterly direction from Sidon as far as Pelusium.
The Haifa Bay does not appear at all and Haifa, not mentioned by name, just out into the sea. The Carmel Mountain reaches as far as the Lake of Tiberias. In the south, the Sinai, shown as a mountainous region, is crossed by the way of the Wandering of the Jews from Ramesses in Egypt through the Red Sea until they reach the Promised Land.
In the Mediterranean Sea there are three vessels with full-blow sails, on one of them appears the escutcheon of Michael Aitsingers and his name.
With a dedication at the right : Michaelis Aitsingeri Austriaci, ad Terra promissionis ...
Published by Jacob Honervogt (c.1590-c.1663) who was a native of Cologne and worked from 1608 as an engraver in Paris. After 1654 he worked with Gérard Jollain.
0 reviews - Write a review
4,000€
384 views
Add to Cart
Ask Question
Add to Wish List Compare this Product