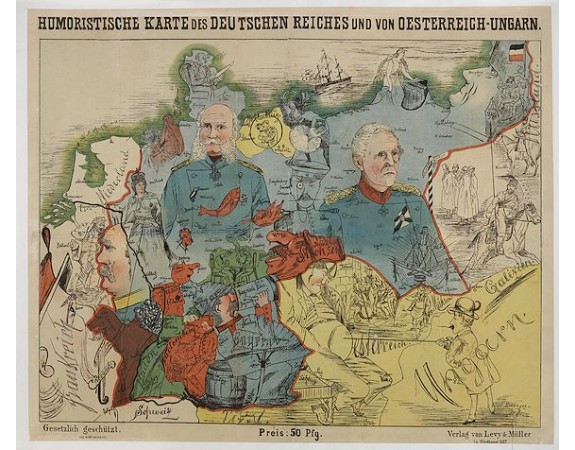 A satirical map of Europe with a title in German that marks the outbreak of the First World War, probably conceived between August and October 1914. Lehmann-Dumont was no doubt inspired by Frederick W. Rose's Serio-comic map where Germany was already a character with both arms spread.
This is a representation of the "Deutsche Michel", the equivalent of John Bull English appeared in the nineteenth century. A rather belligerent German legend comments on the events and explains the many details of this particularly detailed map.
Serbia is shown a bomb in hand, referring to the attack on Archduke Franz Ferdinand. France is a jostled officer letting out his quarter-diviner.
The right hand of the German Michel corresponds to Alsace-Lorraine and it already encroaches on the red which defines the French territory. The rooster gargles with imaginary victories and the "Turcos" - nickname of the Algerian riflemen - implore pity.
England receives a blow of mantle which symbolizes the fleet of battleships which Germany had acquired. Japan appears in an inset off Europe to show that it is in tow of the United Kingdom - it indeed joined the allies in August 1914. The Ottoman Empire threatens to ignite the powders in Crimea but it will join the coalition of German and Austro-Hungarian empires only in October 1914. The same goes for Romania, which here sharpens its sword without having taken sides against its Austro-Hungarian neighbour.

Serio-comic map of Europe depicting the continent at the outbreak of World War I.
Based on 0 reviews. - Write a review
2,000€
639 views
Add to Cart
Ask Question
Add to Wish List Compare this Product