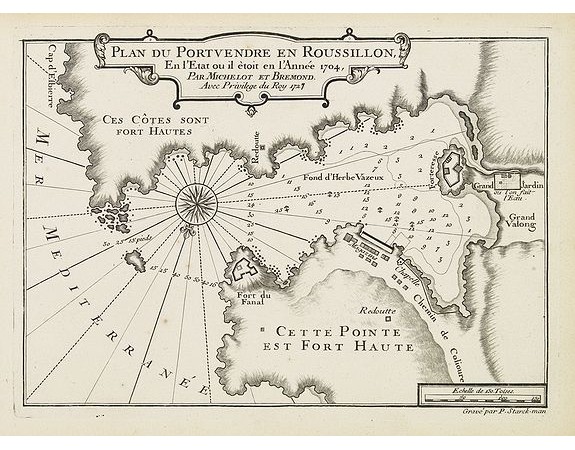 An attractive chart centered on the Bay of Port-Vendres in the Pyrénées Orientales. With scale and large compass-rose. Dated 1727, with the previlege of the King. From : Recueil des Plusieurs plans des ports et rades de la Mer Mediterranée.. Engraved by P.Starckman.
The chart is exceptionally detailed and includes topographical details, soundings, anchorages, etc.

Originally from Saint-Malo, Henri Michelot served from 1670 on sea as a pilot. He was also professor of hydrography in Marseille. He produced his first charts in the early years of the eighteenth century. Often associated with the brothers Laurent and Jean-Andre Bremond, also cartographers, he published with them in 1718 a chart of the Mediterranean in three leaves.
Based on 0 reviews. - Write a review
300€
217 views
Add to Cart
Ask Question
Add to Wish List Compare this Product